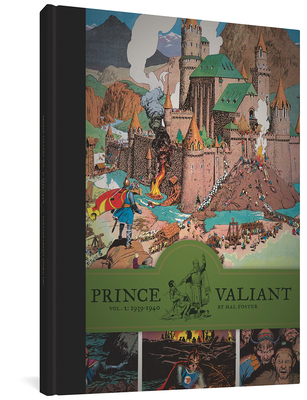 This is book number 2 in the Prince Valiant series.

Swords and sorcery at their grandest as the classic adventure strip continues in second volume!

For 35 years, Hal Foster created epic adventure and romantic fantasy in his legendary Sunday strip, Prince Valiant. Realistic in its visual execution and noble in its subject, depicting a time in which the fabled warriors of history and legends fought together for the greater good, it remains one of the great masterpieces of the medium.

In this second volume, Prince Valiant helps his father reclaim his throne in kingdom of Thule, fights alongside King Arthur, and is made a knight of the Round Table in recompense for his bravery and wit. Bored by the peace he helped to create, Val decides to independently pull together the forces to battle the Huns’ descent on Southern Europe. When Val’s army breaches the Huns’ stronghold, however, he discovers that corruption reigns still further west in Rome. Thus Val sets off with Sir Gawain and Tristam of Arthurian legend fame, and the familial kinship of the trio sees them through chivalrous escapades, false imprisonment and daring escapes. By the end of this volume, they go their separate ways, and Val boards a ship to Sicily—yet a storm approaches, throwing him off-course, as adventure follows him everywhere. Fantagraphics is proud to present these strips, which, thanks to the use of original proof sheets and advances in printing technology, are even brighter and crisper than when they were originally published 70 years ago. Foster’s work, painterly and sweeping, is finally treated to the grand depiction it deserves. These illustrative, time-honored comic strips will enthrall old readers and just as easily awe new ones.

Hal Foster (1892-1982) created Prince Valiant in 1937. Though remaining involved with the strip until his death in 1982, Foster handed the bulk of the scripting and art chores over to his longtime assistant, John Cullen Murphy, in 1971.
Starred Review. Medieval swordplay and adventure have never been as glorious as in Foster’s Sunday-only comic strip. This edition has been reproduced from pristine printer’s proofs to give the gorgeous artwork its crispest version ever.... Prince Valiant is one of the best-drawn comics ever, and this new edition does ample justice to its achievement.

A witch named Horrit once prophesied that Val would never know contentment, but fans of the strip will find it here.
— Vanity Fair

There’s more derring-do than you can shake a sword at! Foster’s stories are filled with vivid, colorful characters, none more engaging than the aptly named Valiant and his never-ending quest for adventure. The artwork is breathtaking.
— Rich Clabaugh - The Christian Science Monitor

Sure I’d read Foster before, but I’d never found a way in. Fortunately, Fantagraphics recently released Prince Valiant Vol. 1: 1937-38, and I was able to absorb the material in a wholly new way.... Prince Valiant opens up a world that I wanted to stay in—a wide-eyed early 20th century approach to fantasy with a now-vanished sincerity and wholesomeness. It’s an all too rare pleasure in comics.

Whether you love the swords and sorcery genre, high adventure, romance, or any or all of the above, Hal Foster’s early work on Prince Valiant is well worth reading. ... Fantagraphics has done a remarkable job remastering these strips, which, thanks to the use of original proof sheets and advances in printing technology, are even brighter and crisper than when they were first published 70 years ago.