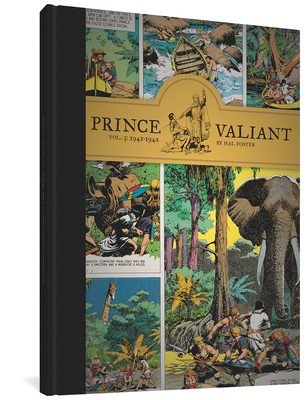 This is book number 3 in the Prince Valiant series.

With this volume, Foster reaches (by common critical consensus) the peak of his drawing and storytelling prowess—a peak at which he will remains for most of the run of this glorious strip.

Almost the entirety of 1941’s strips feature a single ten-month epic entitled “Fights for the Singing Sword,” a globetrotting adventure fueled by Valiant’s obsessive search for his bride-to-be Aleta throughout Northern Africa, with stops in Jerusalem, the Arabic deserts, and, inevitably, a harem which Val must infiltrate. Then finally, in “The Misty Isles” Valiant meets Aleta face to face but upon learning that she has had his crew killed (deservedly so, actually, but still), he flees in anger, vowing never to see her again.

“Homeward Bound,” Valiant continues his travels, with stops in Athens (where he meets the boisterous Viking Boltar, who will become his friend for life), North Africa, and Gaul (where Valiant liberates Gawain), before finally returning to Camelot. But his joyous return is short-lived as an alliance of Picts and Vikings threatens Britain’s security, and thus Valiant must journey forth with, as his ultimate destination, “The Roman Wall.”

Hal Foster (1892-1982) created Prince Valiant in 1937. Though remaining involved with the strip until his death in 1982, Foster handed the bulk of the scripting and art chores over to his longtime assistant, John Cullen Murphy, in 1971.
Starred Review. Medieval swordplay and adventure have never been as glorious as in Foster’s Sunday-only comic strip. This edition has been reproduced from pristine printer’s proofs to give the gorgeous artwork its crispest version ever.... Prince Valiant is one of the best-drawn comics ever, and this new edition does ample justice to its achievement.

A witch named Horrit once prophesied that Val would never know contentment, but fans of the strip will find it here.
— Vanity Fair

Sure I’d read Foster before, but I’d never found a way in. Fortunately, Fantagraphics recently released Prince Valiant Vol. 1: 1937-38, and I was able to absorb the material in a wholly new way.... Prince Valiant opens up a world that I wanted to stay in — a wide-eyed early 20th century approach to fantasy with a now-vanished sincerity and wholesomeness. It’s an all too rare pleasure in comics.