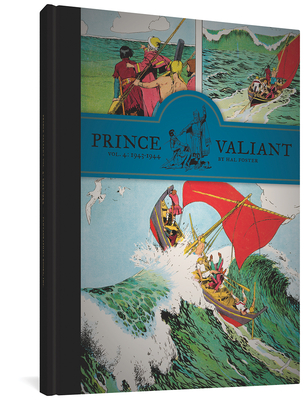 This is book number 4 in the Prince Valiant series.

Haunted by his long-lost love, Prince Valiant journeys back to the land of his birth.

As this fourth volume begins, Prince Valiant, haunted by Aleta, seeks Merlin’s wise counsel. This brief episode segues into one of Hal Foster’s patented epics, “The Long Voyage to Thule,” which ran for seven straight months and featured Valiant’s return to his birthplace and reunion with his father. Of course, Foster’s astonishingly detailed and evocative depictions of Val’s homeland contribute greatly to this sprawling epic.

After a series of shorter adventures including “The Seductress,” “The Call of the Sea,” and “The Jealous Cripple,” Val finally decides he can stand it no more and sets out to find his long-lost love. Long-time fans know that his quest will eventually be successful, but Foster throws so many obstacles in the way of true love that the saga “The Winning of Aleta” would end up stretching a full year and a half, well into the next volume.

With its stunning art reproduced directly from pristine printer’s proofs, Fantagraphics has introduced a new generation to Foster’s masterpiece, while providing long-time fans with the ultimate, definitive version of the strip.

Brian M. Kane is the author of Hal Foster: Prince of Illustrators and James Bama: American Realist. He teaches in the Illustration Department at the Columbus College of Art & Design, Columbus, Ohio. He has a Masters Degree in History of Art from The Ohio State University where he is currently working on his Ph.D. in Art Education with an emphasis in Visual Culture.
Starred Review. Medieval swordplay and adventure have never been as glorious as in Foster’s Sunday-only comic strip. This edition has been reproduced from pristine printer’s proofs to give the gorgeous artwork its crispest version ever.... Prince Valiant is one of the best-drawn comics ever, and this new edition does ample justice to its achievement.

…Valiant remains a hugely enjoyable action strip, as Valiant battles a variety of ne’er do wells on a quest to find his true love, Aleta.

…[T]he mastery Foster brings to bear on his every panel may have been equaled both before and since his prime, but it’s never been surpassed.
— Matt Seneca - The Comics Journal