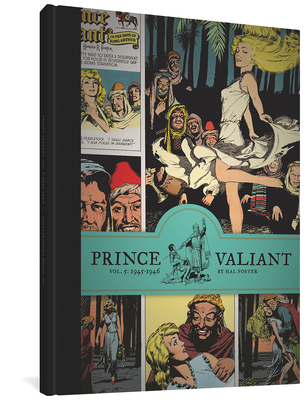 This is book number 5 in the Prince Valiant series.

Our Prince finds his queen to be!

Fully half of this latest volume of Hal Foster’s epic masterpiece — again scanned from superb syndicate proofs — is devoted to the remaining chapters of “The Winning of Aleta,” a 20-month (!) epic in which Valiant obsessively pursues his bride to be. Not surprisingly this is followed by a sequence called “Matrimony,” which ends with a newly wed queen adjusting to the luxurious, exciting court life at Camelot.

But Val’s marriage does not signal an end to his adventures, quite the contrary. In “War in the Forest” Val is sent out to spy on encroaching Saxons — unknowingly aided by Aleta, who, disguised as a small knight (and dubbed “Sir Puny”) helps prevent disaster. But the 1946 strips end with Val and Aleta unable to return to Camelot and the displaced couple journeying to Thule…

Half the strips in this volume also include the delightful “The Medieval Castle,” Foster’s chronicle of two young boys growing up during the time of the First Crusade — but by the end of the 1945 strips this series has ended and the Valiant portion resume its full-page glory.

Hal Foster (1892-1982) created Prince Valiant in 1937. Though remaining involved with the strip until his death in 1982, Foster handed the bulk of the scripting and art chores over to his longtime assistant, John Cullen Murphy, in 1971.
Medieval swordplay and adventure have never been as glorious as in Foster’s Sunday-only comic strip. This edition has been reproduced from pristine printer’s proofs to give the gorgeous artwork its crispest version ever.... Prince Valiant is one of the best-drawn comics ever, and this new edition does ample justice to its achievement.

Sure I’d read Foster before, but I’d never found a way in. Fortunately, Fantagraphics recently released Prince Valiant Vol. 1: 1937-38, and I was able to absorb the material in a wholly new way.... Prince Valiant opens up a world that I wanted to stay in—a wide-eyed early 20th century approach to fantasy with a now-vanished sincerity and wholesomeness. It’s an all too rare pleasure in comics.