The Late Child And Other Animals (Hardcover) 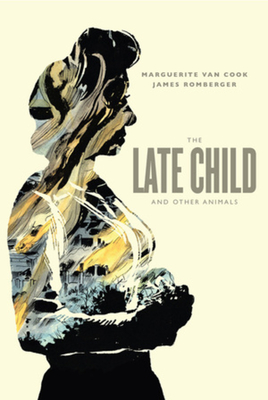 The Late Child And Other Animals (Hardcover)

In this graphic memoir, a World War II survivor/single mother has a child out of wedlock, and the law threatens to take her children away from her.

Hetty survives the bombing of Portsmouth by the Nazis in World War II, only to learn that her soldier husband has been killed on the way back home from North Africa. She must then complete the adoption of her young daughter June alone. A decade later, she gives birth to a bastard daughter, Marguerite. Now Hetty must go before a tribunal to prove that she will be a fit mother. What follows is the story of little Marguerite’s childhood in the recovering British naval port and the rural beauty of the Isle of Wight and in Normandy, France. The journeys and struggles over decades of this mother and daughter are linked in five episodes that veer between lyricism, wry wit, and harrowing suspense. The Late Child and Other Animals is an original graphic novel, a generational autobiography written by legendary punk diva and award-winning poet Marguerite Van Cook, adapted by artist James Romberger, the creator of the Eisner-nominated Post York. The team of Romberger and Van Cook is also responsible for the adaptation and art of 7 Miles a Second, their critically acclaimed graphic memoir collaboration with the late multimedia artist and AIDS activist, David Wojnarowicz.

Marguerite Van Cook was born in England and has several degrees. She's been a punk performer, ran the Ground Zero Gallery, directed a film and has written and colored comics for DC. She lives in New York City with her son, Crosby, and her husband and collaborator, James Romberger.

James Romberger is a fine artist and cartoonist who lives in New York City with his son, Crosby, and his wife, Marguerite Van Cook.
The stories in The Late Child and Other Animals are beautiful haunts, the stories that were never told and have returned, fully alive and tense with implication. The stories are the intersection of a national history and the exquisitely drawn inner life of the late child herself, Marguerite. The world Van Cook and Romberger recreate is unsafe, unfolding, and shot through with joy.

The Late Child and Other Animals shares the features that made Marguerite Van Cook and James Romberger's collaboration with David Wojnarowicz such a success: the lush color, the creative visual mapping of a psychic landscape. The hallmarks of this remarkable writer-artist team are intensified in this loose, often lovely, personal coming-of-age narrative, haunted by a dark undercurrent, that focuses on Van Cook and her mother.

— Hillary Chute (Outside the Box: Interviews with Contemporary Cartoonists)

Overwhelming, my first encounter with a graphic gathering of stories: I devoured them all in a huge gulp, from the detailed delights of fields and flowers to the fearsome tale of man and girl. Everything feels so very alive in these pages, words and colors and line!
— Mary Ann Caws (The Surrealist Look: An Erotics of Encounter, Surprised in Translation, and The Modern Art Cookbook)

This breathtaking auto/biography traces the life path of a mother, and then her daughter, as it weaves together fragments of each woman's memories to form a careful mosaic. The images and accompanying text together reflect a unique and powerful lyricism, one that captures everything from the aftermath of a grisly, war-torn landscape to youthful friendship blossoming on the Coast of Normandy. Reading The Late Child and Other Animals, one experiences how poetic the graphic novel form can be, how memories rendered through sharp lines, soft watercolors, and penetrating narrative prose can immerse you in worlds far, far away.
— Tahneer Oksman (Mourning the Family Album)

In all, this is a quite extraordinary piece of work. It sweeps us flawlessly along from a hillside above Portsmouth burning in the Blitz to a Parisian café terrace at the end of the turbulent ’60s. Wonderfully conceived and skillfully executed, it holds its own both as literary and as graphic art. And for all its evident terrors, in the end it provides a simple and irrefutable affirmation of one girl’s ability to achieve freedom and equilibrium in a complex and quite ambivalent world.
— Glenn Harcourt - Artillery

Van Cook’s reminiscences unfold in an impressionistic way, relating not only what happened but the feelings involved. ... It’s Van Cook’s voice that is the star here, but longtime partner Romberger displays an intimate understanding of the person using that voice. His art has multiple goals, underlining the sensuousness while also bringing her flights a little down to earth and giving a form to the more abstract qualities of her experiences. Together they make it a complete emotional package of calm, philosophical maturity. [Starred Review]

Van Cook’s elegiac memoir of growing up in post WWII Britain… [is] as thoughtful a book on growing up as you’ll find anywhere.
— Calvin Reid - Publishers Weekly

From the burning streets of World War II Portsmouth to the Paris riots of 1968, The Late Child And Other Animals takes readers on a heart-wrenching journey as it explores major moments in the lives of a mother and daughter. … This book has incredible psychological depth; Van Cook uses dense (but never heavy) narration to thoroughly mine the mental and emotional workings of the main characters, and Romberger’s layouts do phenomenal work reflecting [their] mindset and perception.

Marguerite Van Cook's semi-autobiography The Late Child and Other Animals offers a stunningly beautiful glimpse of her life and how her early experiences and those of her mother shaped her. It's not the punk poet's first foray into graphic novels, but it is nevertheless a fresh and organic origin story ... [It's] a story that is as poignant as it is charming.

— Cody Ray Shafer - Under the Radar

The Late Child is a rich and intelligent work, one of the lushest and most giving graphic novels in recent memory.

Each of these [stories] centers on an epiphany, a moment of realization or transformation, and there are common motifs that wind through the stories, both specific images -- crows, water, even the profile of Marguerite’s mother -- and more general themes, such as the desire to embrace the world and the realization that it is a dangerous place.
— Brigid Alverson - Robot 6

While the book is all about exposing secrets, [the] last chapter demonstrates above all else that it’s also about seizing a voice, especially as a woman in a relentlessly sexist society. Van Cook shows how she seized a voice for herself and in the process gave a voice to her mother. In The Late Child, Van Cook says things that needed to be said about her past, things that needed to be said for a long time.

In The Late Child and Other Animals, Marguerite Van Cook and James Romberger team up again to produce a lyrical, visceral and expressionistic memoir of a difficult childhood.

…[A] phenomenal achievement of personal exploration and empathetic biography. … This book is an intimate epic of what was missed in one’s own family and personal memory … The Late Child is a testament of the valued lives and essential insights that have a right to the years it will take for their time to come.