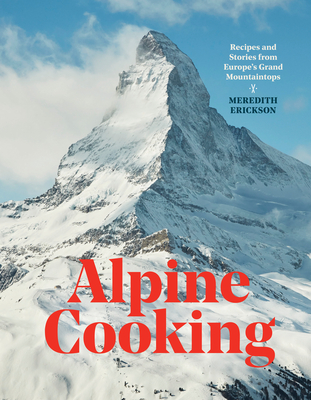 
Special Order—Subject to Availability
A lushly photographed cookbook and travelogue showcasing the regional cuisines of the Alps, including 80 recipes for the elegant, rustic dishes served in the chalets and mountain huts situated among the alpine peaks of Italy, Austria, Switzerland, and France.

“A passionate exploration of all things Alpine . . . this one is a must-have for every ski bum foodie.”—Vogue

From the wintry peaks of Chamonix and the picturesque trails of Gstaad to the remote villages of the Gastein Valley, the alpine regions of Europe are all-season wonderlands that offer outdoor adventure alongside hearty cuisine and intriguing characters. In Alpine Cooking, food writer Meredith Erickson travels through the region--by car, on foot, and via funicular--collecting the recipes and stories of the legendary stubes, chalets, and refugios. On the menu is an eclectic mix of mountain dishes: radicchio and speck dumplings, fondue brioche, the best schnitzel recipe, Bombardinos, warming soups, wine cave fonduta, a Chartreuse soufflé, and a host of decadent strudels and confections (Salzburger Nockerl, anyone?) served with a bottle of Riesling plucked from the snow bank beside your dining table. Organized by country and including logistical tips, detailed maps, the alpine address book, and narrative interludes discussing alpine art and wine, the Tour de France, high-altitude railways, grand European hotels, and other essential topics, this gorgeous and spectacularly photographed cookbook is a romantic ode to life in the mountains for food lovers, travelers, skiers, hikers, and anyone who feels the pull of the peaks.

“This generous cookbook and travelogue will have readers booking trips to the Alps of Italy, France, Austria, and Switzerland. . . . Erickson beautifully captures Alpine food and culture in this standout volume.”—Publishers Weekly (starred review)
Meredith Erickson is the co-author of numerous cookbooks, including The Art of Living According to Joe Beef, Le Pigeon, Olympia Provisions, Kristen Kish Cooking, Claridge's: The Cookbook, Joe Beef: Surviving the Apocalypse, and the forthcoming Frasca. She has written for the New York Times, Elle, Saveur, Monocle, and Lucky Peach, and also plans and hosts tours throughout the Alps. Meredith splits her time between Montreal and Milan.
“A book to enjoy when it blusters outdoors, even without a plane ticket to Europe or a pair of skis.”—The New York Times

“This is one of my favorite cookbooks, ever.”—David Lebovitz

"Then, there are books that transport me to where I’ve never been. Meredith Erickson’s Alpine Cooking: Recipes and Stories from Europe’s Grand Mountaintops sends a welcome shiver down the spine. The photographs, with gleaming, clear light and the brightest blue skies against snowy peaks, conjure the imagined nostalgia of a perfect après ski moment. Her treatise on schnitzel is contagiously passionate; her mention of the hidden basement workshops of grand hotels captures the romance of those industrious spaces; each section is marked by a love letter to the geography of a region. Erickson situates you in the landscape and saves a space for you at the table, with raclette and cornichon waiting."—The Globe and Mail


“A wide variety of readers, and their friends, will enjoy the kaleidoscope of recipes, photos, history, and anecdotes.”—Library Journal

“This is big, bold, gloriously old-fashioned and the perfect title to snuggle up with to dream about the skiing holiday you can’t afford.”—Diana Henry, The Telegraph

“Meredith Erickson delivers both the coziest as well as the most elegant cookbook of the fall. . . . Just looking through this beauty will transport you from your messy apartment to après ski somewhere in the Alps.”—Inside Hook