Because I Have to: The Path to Survival, the Uyghur Struggle (Broken Silence) (Paperback) 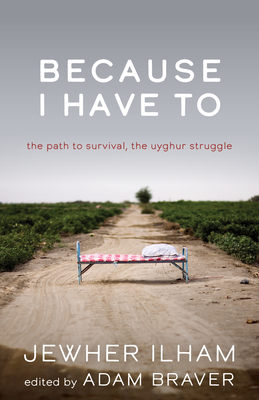 Because I Have to: The Path to Survival, the Uyghur Struggle (Broken Silence) (Paperback)


In Stock—Click for Locations
When Jewher Ilham's father, Ilham Tohti, an internationally known advocate for peaceful dialogue between his Uyghur people and Han Chinese, was detained at the Beijing airport in February 2013 on charges of separatism, and later sentenced to life in prison, Jewher was forced to begin a new life apart from her family in a new country. There, she found her voice as an advocate for her father, and for Uyghur people being forced into concentration camps by the Chinese government.
In Because I Have To: The Path To Survival, The Uyghur Struggle, Jewher shares an intimate account of how she maintained the strength and courage to fight for her father, the sometimes emotional toll it took on her, and the inspiration and loss of her mentor. With the inclusion of testimonials of Uyghur camp survivors and others affected by the crackdown on Uyghurs in China, Because I Have To: The Path to Survival, The Uyghur Struggle tells the story of one person, and of an entire culture under threat.
Jewher Ilham graduated with a B.A from Indiana University in May of 2019 in political science, Near Eastern languages and cultures, and Central Eurasian studies. As an advocate for her imprisoned father, she testified before the U.S. Congressional-Executive Committee on China, wrote op-eds in The New York Times, met with a number of government officials including former Secretary of State John Kerry, and received numerous awards worldwide on behalf of her father. At the Worker Rights Consortium, she works as an associate/Project to Combat Forced Labor. She is also assisting on a documentary film about Uyghurs as well as to continue to advocate on behalf of her father. She lives in Arlington, Virginia.