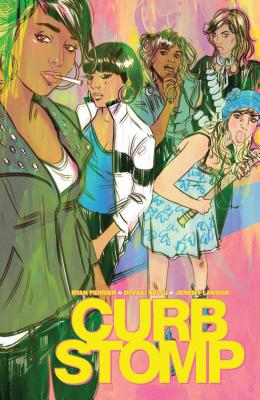 
Special Order—Subject to Availability
(This book cannot be returned.)
Three gangs. Five girls. No way out.

Machete Betty leads a small gang of women under the self-appointed task of protecting their home of Old Beach, one of  three boroughs  surrounding  a  posh  metropolitan  city. When Betty takes the life of a rival gang member in an act of self-defense, she sets off a chain reaction of retaliation, gang warfare, and unlikely allies. It’s up to the The Fever—Machete Betty, Derby Girl, Bloody Mary, Daisy Chain, and Violet Volt—to defend their turf at all costs.

Curb Stomp is a no-holds-barred, visceral look at the lengths one woman will go to protect her home. Rising star Ryan Ferrier (D4VE) teams up with newcomer artist Devaki Neogi to create the unflinching story of Machete Betty and the girls of The Fever, a gang fiercely committed to protecting their turf.
Ryan Ferrier is a Canadian writer and letterer. He's written D4VE for Monkeybrain Comics, as well as Tiger Lawyer, The Brothers James, and Ultranova for Challenger Comics, an independent collective imprint he runs with artist Brian Level.