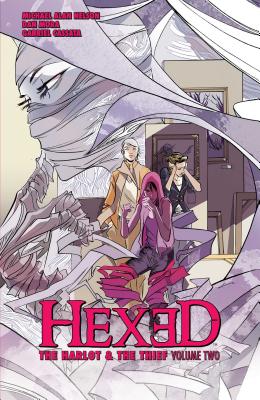 This is book number 2 in the Hexed series.

After stopping a supernatural sibling rivalry from setting a gallery (and the city) ablaze, there's no rest for Supernatural Thief Lucifer -- the surviving sister, Madame Cymbaline, wants Lucifer to join her organization, and won't take no for an answer. Cymbaline's quest comes at a great cost to both women, as their quest for vengeance takes them through dimensions and to their limits.

Ahexed The Harlot & The Thief marks the ongoing series debut for the character that launched PRETTY DEADLY Artist Emma Rios' career in 2008. Rios returns to provide the cover for this volume, while newcomer Dan Mora brings a lyrical and unique take to the artwork, paired with the script from one of comics' leading horror writers, Michael Alan Nelson (DAY MEN, 28 DAYS LATER, DINGO).
Dan Mora is an artist whose work includes Buffyverse comics from Boom! Studios.