The Future of Power (Paperback) 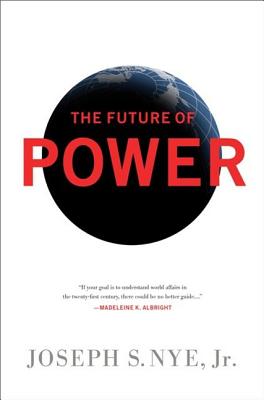 The Future of Power (Paperback)


Not On Our Shelves—Ships in 1-5 Days
The Future of Power examines what it means to be forceful and effective in a world in which the traditional ideas of state power have been upended by technology, and rogue actors. Joseph S. Nye, Jr., a longtime analyst of power and a hands-on practitioner in government, delivers a new power narrative that considers the shifts, innovations, bold technologies, and new relationships that are defining the twenty-first century. He shows how power resources are adapting to the digital age and how smart power strategies must include more than a country's military strength.

At the beginning of the twenty-first century, unsurpassed in military strength and ownership of world resources, the United States was indisputably the most powerful nation in the world. Today, China, Russia, India, and others are increasing their share of world power resources. Information once reserved for the government is now available for mass consumption. The Internet has literally put power at the fingertips of nonstate agents, allowing them to launch cyberattacks from their homes. The cyberage has created a new power frontier among states, ripe with opportunity for developing countries. To remain at the pinnacle of world power, the United States must adopt a strategy that designed for a global information age.
Joseph S. Nye, Jr., Dean of the Kennedy School of Government at Harvard University, was Chairman of the National Intelligence Council and Assistant Secretary of Defense in the Clinton administration. He is the author of several books, including The Paradox of American Power: Why the World's Only Superpower Can't Go It Alone and Bound to Lead: The Changing Nature of American Power. PublicAffairs also published his political thriller, The Power Game.
"Excellent...Nye offers an illuminating distillation of the power relationships shaping a world in which the state with the best military can lose to the adversary with the better story."—The Financial Times

"As power moves from west to east and from the palaces of dictators to the street, it is not just the identities of power brokers that are changing: so is the very meaning of power. No one is better placed to explain these trends than the scholar-statesman Joe Nye... The Future of Power contains important essays on both 'cyber power' and 'American decline', but what is most useful is Nye's subtle exegesis of the mechanics of more conventional forms of power."—The New Statesman

"A concise, forceful statement of what Nye refers to as the liberal realist position in the US academy and in US politics... (which) paints a plausible scenario for the continuance of the US at the heart of the international system."—Times Higher Education Supplement

"While the British generally take a wary attitude to international gurus, it is worth bearing in mind that what Nye... think(s) today has a habit of becoming the global consensus tomorrow."—Mary Dejevksy, The Independent