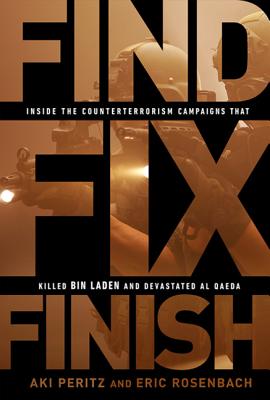 
Not On Our Shelves—Ships in 1-5 Days
On 9/11 the U.S. had effectively no counterterrorism doctrine. Fast forward ten years: Osama bin Laden is dead; al Qaeda is organizationally ruined and pinned in the tribal areas of Pakistan and Afghanistan; there has been no major attack on American soil; and while there has been at least one instance of a massive planned attack, it was crushed by the greatest international collaboration of intelligence services seen since the end of the Cold War. It's been a remarkable transformation.

Aki Peritz and Eric Rosenbach have experienced first-hand the monumental strategy changes in our country's counterterrorism strategy within the intelligence, defense, and political communities. In this book, they show how America learned to be very good at taking on the terrorists, often one at a time, in ever more lethally incisive operations. They offer new details behind some headlines from the last decade. They are frank about the mistakes that have been made. And they explain how a concept coined by General Grant during the Civil War has been reinvented in the age of satellite technology to manage a globally distributed foe, allowing the U.S. to find, fix, and finish its enemies.
Aki Peritz is the senior national security advisor to the Third Way think tank. He has authored or coauthored with Eric Rosenbach various publications on a wide range of national security issues at Harvard's Belfer Center. He worked for several years at the CIA's Counterterrorism Center. In 2006-2007, he served in Iraq.

Eric Rosenbach currently serves as Deputy Assistant Secretary of Defense. He has taught courses on counterterrorism policy at the Harvard Kennedy School, and served as a professional staff member on the Senate Select Committee on Intelligence, where he led oversight of U.S. counterterrorism programs.
Richard A. Clarke, former national coordinator for counterterrorism and author of Against All Enemies and Defeating the Jihadists
“Filled with insights from two insiders who have had direct experience with countering terrorists, Find, Fix, Finish combines the drama of vital operations unfolding in real time with legal and moral perspectives necessary to understand how our world has changed forever. The book captures the evolution of counterterrorism operations since 9/11 like no other."

Chuck Hagel, United States Secretary of Defense
“This book magnificently captures the very essence of the toughest policy, legal, and moral questions our nation faced in fighting terrorists for the last decade. And the authors' overall conclusion is important for all Americans to understand: We can defeat terrorists without sacrificing the ideals that make this nation great.”

Kirkus Reviews
“A skillful combination of antiterrorism fireworks with perceptive analysis of our strategies.”

Huntington News
“Outstanding…Regardless of your personal views on the so-called "War on Terror" "Find, Fix, Finish" is a comprehensive source book on the facts of terror attacks and how many such attacks were foiled by law enforcement and security agencies.”