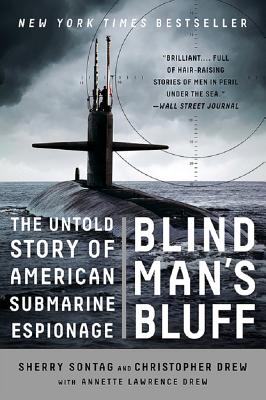 
Not On Our Shelves—Ships in 1-5 Days
Discover the secret history of America's submarine warfare in this fast-paced and deeply researched chronicle of adventure and intrigue during the Cold War that reads like a spy thriller.

Blind Man's Bluff is an exciting, epic story of adventure, ingenuity, courage, and disaster beneath the sea. This New York Times bestseller reveals previously unknown dramas, such as:

A magnificent achievement in investigative reporting, Blind Man's Bluff reads like a spy thriller, but with one important difference -- everything in it is true.

Sherry Sontag is a former staff writer for the National Law Journal and has written for the New York Times.

Christopher Drew is a special projects editor at the New York Times and has won numerous awards for his investigative reporting.

Annette Lawrence Drew, the book's researcher, has a PhD from Princeton.
"Packed with
real life adventures that Tom Clancy could only have guessed at. . . . More
than a collection of sea stories. It reveals how submarine operations during
the cold war had a profound impact on strategic decisions made in the Kremlin
and Washington. . . . With Naval agents on their heels . . . Sherry Sontag and Christopher Drew have made a successful end run around stacks
of secrecy oaths and the locked lips of the Silent Service to make public some of
the most astounding military operations of the cold war. . . . Lock the doors
and draw the shades, because this book is a well written, highly readable account
of man and machine working together to do the impossible for the highest of
stakes."—Washington Monthly

"The veterans of the 'Silent
Service' are silent no more."—John Lehman,former secretary of the Navy, WallStreet Journal

"The book is filled with specifics . . . but thankfully not presented in the dry techno-speak of many military histories. This one is very human and easy to read."—Washington Post

"A tale that has the Navy
refusing to comment and retired submariners rejoicing that their story is
finally being told. . . . Espionage missions described in this book are among
the most sensitive and secret intelligence operations of the cold war. Most have
never been described in detail, if at all, and the Navy to this day refuses to
acknowledge them publicly."—Associated Press

"It's almost impossible to
make up stuff this good."—John Weisman,author of the Rogue Warrior Series

"Excellent history . . .
that reads like a Tom Clancy novel."—Booklist

"Hard-core investigative
reporting at its crispest. . . . The stories are exciting, the personalities border
on the eccentric, and the constant turf battles among various U.S. government
agencies in those often top-secret submarine activities make for intriguing reading."—Library Journal

"Strong stuff! . . . Highly
recommended. . . . A compelling testimony to the courage and ingenuity of the
submariners and the intelligence wizards and operators who made use of this
weapon during the cold war and up to this day."—Roy Jonkers, AFIO ExecutiveDirector, Weekly Intelligence Notes

"As exciting as early Tom
Clancy novels . . . engrossing. . . . Highly recommended for everyone with an
interest in submarines or intelligence."—Sea Power

"An immensely readable look
at some of the blackest secrets of the cold war, as U.S. and Soviet subs engage
in subterfuge as intriguing as a thriller novel."—Providence Journal-Bulletin

"Impressive . . . The
authors managed to capture the flavor of submarine life, the innovation and ingenuity
of men who have to fix complex equipment when there is no supply line, the
command structure that seems casual to an outsider but which works better in an
undersea environment than the more rigid arrangements on surface or shore
commands."—NewLondon Day (CT)

"The most comprehensive look
at the work of these intrepid sailors . . . A celebration of their ingenuity
and valor."—Baltimore Sun

"The authors write of
top-secret operations to tap underwater Soviet cables, recover a live H-bomb
mistakenly lost on the ocean floor, and steal a Russian sub. Better yet, all of
it is true- and revealed on these pages for the first time."—Investor's Business Daily