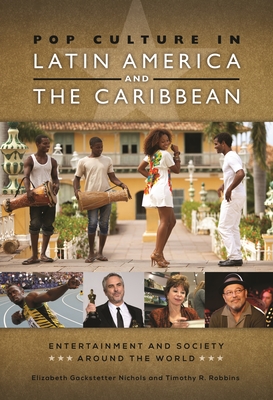 In recent times, Latin American influences have permeated American culture through music, movies, television, and literature. This sweeping volume serves as a ready-reference guide to pop culture in Central America, South America, and the Caribbean, focusing on Mexico, Brazil, Venezuela, Argentina, Haiti, Cuba, the Dominican Republic, Jamaica, and Costa Rica, among other areas. The work encourages hands-on engagement with the popular culture in these places, making such suggestions as Brazilian films to rent or where to find Venezuelan music on the Internet.

To start, the book covers various perspectives and issues of these regions, including the influence of the United States, how the idea of machismo reflects on the portrayal of women in these societies, and the representation of Latino-Caribo cultures in film and other mediums. Entries cover key trends, people, events, and products from the beginning of the 20th century to the present day. Each section gives detailed information and profound insights into some of the more academic--and often controversial--debates on the subject, while the inclusion of the Internet, social media, and video games make the book timely and relevant.