Dictionary of Word Origins: The Histories of More Than 8,000 English-Language Words (Paperback) 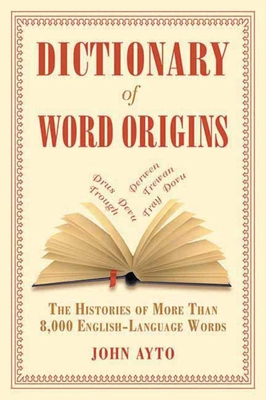 Dictionary of Word Origins: The Histories of More Than 8,000 English-Language Words (Paperback)


In Stock—Click for Locations
Uncover the hidden and often surprising connection between words.

Written in a clear and informative style, the more than 8,000 articles reveal the origins of and links between some of the most common English-language words. What is the link between map and apron, acrobat and oxygen, zeal and jealousy, flour and pollen, secret and crime?

Did you know that crimson originally comes from the name of tiny scale insects, the kermes, from whose dried bodies a red dyestuff is made? That Yankee began as a nickname for Dutchmen? That omelette evolved from amulette, “a thin sheet of metal,” and is a not-too-distant cousin of the word laminate? That jeans find their antecedent in jean fustian, meaning “a cotton fabric from Genoa”?

They also contain an extensive selection of words whose life histories are intrinsically fascinating or instructive. This dictionary shows how modern English has developed from its Indo-European roots and how the various influences on the language—from migration and invasion to exploration, trade, technology, and scholarship—have intermingled. It is an invaluable addition to any English or linguistics library.