A Power to Translate the World: New Essays on Emerson and International Culture (Paperback) 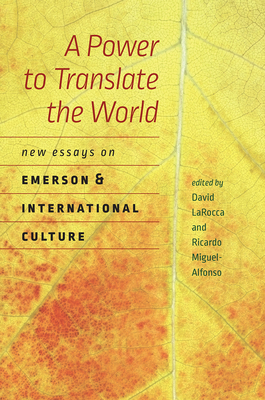 A Power to Translate the World: New Essays on Emerson and International Culture (Paperback)


Special Order—Subject to Availability
This thought-provoking collection gathers a roster of seasoned Emerson scholars to address anew the way non-American writers and texts influenced Emerson, while also discussing the manner in which Emerson’s writings influenced a diverse array of non-American authors. This volume includes new, original, and engaging research on crucial topics that have for the most part been absent from recent critical literature. While the motivations for this project will be familiar to scholars of literary studies and the history of philosophy, its topics, themes, and texts are distinctly novel. A Power to Translate the World provides a touchstone for a new generation of scholars trying to orient themselves to Emerson’s ongoing relevance to global literature and philosophy.
DAVID LAROCCA is visiting scholar in the Department of English at Cornell University and lecturer in the Department of Philosophy at the College at Cortland, State University of New York. RICARDO MIGUEL-ALFONSO is associate professor of American literature in the Department of Modern Philology at the University of Castilla-La Mancha, Spain.