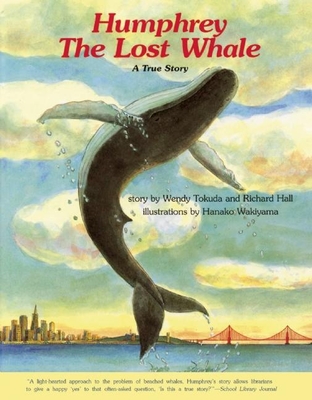 A light-hearted approach to the problem of beached whales, Humphrey's story allows librarians to give a happy 'yes' to that often-asked question, 'Is this a true story?'--School Library Journal

What happens to Humphrey makes a fascinating and delightful story for young and old alike.--KIdsGrowth.com

Humpback whales are magnificent creatures that sing beautiful songs to each other underwater. In the whole world there are very few of them, so each one is quite special.

And they are intelligent. Every winter they travel south, every summer they head north, and they always know the way.

But even whales can make mistakes . . .

In October 1985 a forty-five-foot long, forty-ton humpback whale wandered into San Francisco Bay and for twenty-six days struggled mightily to find his way back to the ocean. This true, illustrated story of Humphrey's adventure has been a children's favorite for more than twenty-five years. The 2014 edition has updated news on whales but retains the beloved art and text for big-ocean-mammal lovers everywhere. Adopted for Reading Rainbow.

Richard Hall is an award-winning TV and film producer in Los Angeles, California.

Hanako Wakiyama lives in southern California and is a widely published author and illustrator of children's books.

Wendy Tokuda is a well-known media personality who has anchored and reported in the Bay Area for nearly 30 years. She has won the Peabody Award, a National Emmy for Public Service, the national Sigma Delta Chi Public Service Award, the NAB Education Foundation's "Service to America" Award and most recently, the Temple Award for Creative Altruism. Richard Hall is an award-winning TV and film producer and the president of Great Blue Productions in Los Angeles. Hanako Wakiyama was born in Tokyo and moved with her family to California as a teenager. She is a published author and an illustrator of children's books. Her credits include From Dawn to Dreams: Poems for Busy Babies, Best Pet of All [Modern Gems Edition], Goldie Locks Has Chicken Pox, Little Bo Peep Can't Get to Sleep.