Coming Home to Tibet: A Memoir of Love, Loss, and Belonging (Paperback) 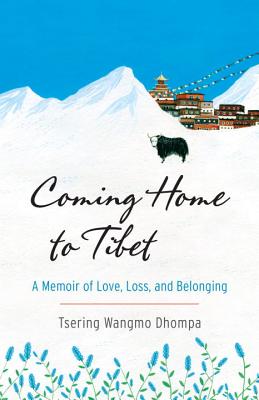 Coming Home to Tibet: A Memoir of Love, Loss, and Belonging (Paperback)


Special Order—Subject to Availability
In this compelling, poetic memoir of love, loss, and longing, a daughter's pilgrimage to her mother's native Tibet becomes a journey of homecoming and self-discovery.

In this beautifully written memoir, a daughter travels to her mother's Tibetan homeland and finds both her own deep connections to her heritage and a people trying to maintain its cultural integrity despite Chinese occupation.
After her mother dies in a car accident in India, Tsering Wangmo Dhompa decides to take a handful of her ashes back to her homeland in Tibet. Her mother left Tibet in her youth as a refugee and lived in exile the rest of her life, always yearning to return home. When the author arrives at the foothills of her mother's ancestral home in a nomadic village in East Tibet, she realizes that she had been preparing for this homecoming her whole life. Coming Home to Tibet is Dhompa's evocative tribute to her mother, and a homeland that she knew little about.
Dhompa's story is interlaced with poetic prose describing the land, people, and spirit of the country as experienced by a refugee seeing her country for the first time. It's an intriguing memoir and also an unusual inside view of life in contemporary Tibet, among ordinary people trying to negotiate the changes enforced on it by Chinese rule and modern society.
TSERING WANGMO DHOMPA is the first Tibetan female poet to be published in English. Her first book of poems, Rules of the House (Apogee Press, 2002) was a finalist for the Asian American Literary Awards in 2003. She was raised in India and Nepal and is fluent in several languages and dialects--including Tibetan, Hindi, and Nepali. Tsering received her BA from Lady Shri Ram College, Delhi University, her MA from University of Massachusetts in Amherst, and her MFA in Creative Writing from San Francisco State. Her poetry articulates the nostalgia of displaced Tibetans, recording the memories of elders in Tibetan communities.
“Tsering Wangmo Dhompa is a poet who straddles several worlds and languages. In Coming Home to Tibet, she writes beautifully of her life, her family, Tibet’s astonishing landscape, and the tragedy of its contemporary political situation. As a Tibetan, Dhompa sees the traditional culture of her homeland lovingly. As a Westerner, she sees its shortcomings. So this book is a blessing for those of us interested in Tibet: it paints a sensitive and detailed portrait, from the inside, that is both critical and sympathetic.

As a Buddhist concerned about transmission of the tradition to the West, Coming Home to Tibet gave me a lot to think about. To what extent is Buddhism, as Western adherents generally see it, a psychology and philosophy divorced from its cultural moorings—and to what extent do we fundamentally misunderstand Buddhism when we look at it that way? And in that misunderstanding, do we lose a great deal of the goodness Buddhism might offer us? Dhompa does not engage such questions abstractly: her personal reflections, as an educated Tibetan Westerner, provide more powerful food for thought about this question than any theoretical discussion could.

With all this, Coming Home to Tibet is essentially a personal memoir about Dhompa's late mother and the life they led in exile, until her mother's tragic death in an auto accident in Nepal. It is a moving love story about two extraordinarily brave women walking hand in hand through one of the most heart-rending tragedies of our lifetime.”—Norman Fischer, author of What is Zen? and Training in Compassion