The Pocket Hagakure: The Book of the Samurai (Shambhala Pocket Library) (Paperback) 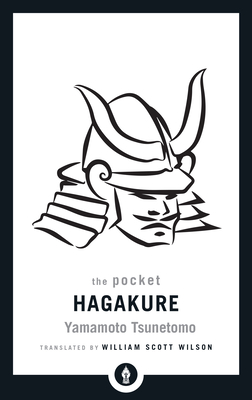 The Pocket Hagakure: The Book of the Samurai (Shambhala Pocket Library) (Paperback)


In Stock—Click for Locations
The definitive translation of the seminal treatise on the code of the samurai.

Living and dying with bravery and honor is at the heart of Hagakure, a series of over 1,300 short texts written by eighteenth-century samurai Yamamoto Tsunetomo. These texts illuminate the classic Japanese concept of bushido (the Way of the Warrior), which dictated how samurai were expected to behave, conduct themselves, live, and die. Acclaimed translator William Scott Wilson has selected and translated here three hundred of those texts to create an accessible distillation of this guide, making it one of the most thorough and astonishing windows into the captivating world of the samurai available.

This edition includes an introduction that delves into the Zen concept of muga, or “death” of the ego, giving an in-depth historical and philosophical background for the more metaphorical reading of Hagakure that is based on Tsunetomo’s reference to bushido as “the Way of death.” Through this lens, which has held a morbid fascination for readers through the years, the classic takes on a fresh and nuanced appeal.

This book was previously published under the title Hagakure.

This book is part of the Shambhala Pocket Library series.

The Shambhala Pocket Library is a collection of short, portable teachings from notable figures across religious traditions and classic texts. The covers in this series are rendered by Colorado artist Robert Spellman. The books in this collection distill the wisdom and heart of the work Shambhala Publications has published over 50 years into a compact format that is collectible, reader-friendly, and applicable to everyday life.
WILLIAM SCOTT WILSON is the foremost translator into English of traditional Japanese texts on samurai culture. He received BA degrees from Dartmouth College and the Monterey Institute of Foreign Studies, and an MA in Japanese literary studies from the University of Washington. His best-selling books include The Book of Five Rings; The Unfettered Mind; and The Lone Samurai, a biography of Miyamoto Musashi.