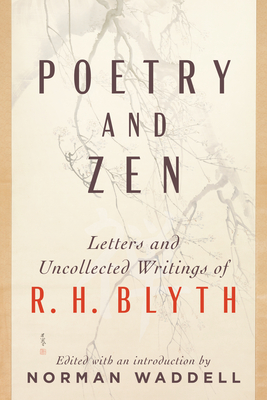 
Special Order—Subject to Availability
Never before published letters and uncollected short writings of R. H. Blyth, champion of Zen and the person who brought haiku to the world.

Poetry and Zen assembles a remarkable literary feast: the letters, articles, translations, reviews, and selections from the papers of Reginald Horace Blyth (1898–1964). Following on the landmark success of Zen in English Literature and Oriental Classics (1942), Blyth’s voluminous writings on Zen, Japanese culture, and the Japanese verse forms haiku and senryū captured the imagination of English-speaking readers in the decades following World War II. His enlightening wit and inimitable style struck a particularly sensitive chord in the artistic community, providing inspiration to many poets and writers and helping to kindle global interest in Zen and haiku.

Blyth’s penetrating insights on these topics in a series of books published between 1942 and 1970 helped lay the foundation for the remarkable expansion of Zen outside of East Asia, as well as the popularization of haiku as an international verse form that took place after his death. Poetry and Zen is the first collection of Blyth’s letters and short writings. The generous array of Blyth‘s literary output and personal writing on display here showcases the wide-ranging interests and brilliant mind of a pivotal figure in the history of modern Zen and Japanese poetry.
R. H. BLYTH (1898-1964) stands with just a few others—D. T. Suzuki, Alan Watts, Ruth Fuller Sasaki—as the earliest successful proponents of Japanese literary aesthetics and Zen practice and worldviews to Western readers. His 1942 book Zen in English Literature and Oriental Classics is a landmark in the cultural history of modern Zen, and his volumes of translated East Asian poetry helped bring that region's poetic traditions to world renown.

NORMAN WADDELL, born in Washington, D.C. in 1940, was attracted to Japan by the works of the legendary D. T. Suzuki and his protégée R. H. Blyth. He taught at Otani University for over thirty years, and was editor of the Eastern Buddhist Journal for several decades. He has published more than a dozen books on Japanese Zen Buddhism and is considered one of the finest translators of sacred texts of our time. He is the authoritative English translator of works by and about Hakuin.
“R. H. Blyth is for me a hero of literature. His books altered the world I could know, both in poems and through them.”—Jane Hirshfield, author of Ledger and The Heart of Haiku

“In Poetry and Zen: Letters and Uncollected Writings of R. H. Blyth, we find many dimensions of this brilliant man: his almost obsessive love of music, his deep intellectual curiosity, his literary prejudices, and his deep humanity—just for starters. Many of us have found our lives changed by his many books on Japanese and Oriental culture, and this volume gives us a profound look into this complex and fascinating man’s interior. A must-read.”—William Scott Wilson, translator of Hagakure and The Book of Five Rings

“Blyth’s monumental work as a writer and translator, especially his four-volume translation Haiku, had an enormously transformative influence across the range of modern Zen and poetry and literary culture more broadly—from Gary Snyder and Robert Aitken to Octavio Paz and Roland Barthes. Here is a treasure-house of his more personal and concise writing, and it is full of jewels.”—David Hinton, author of Hunger Mountain and China Root

“In high school, R. H. Blyth’s four-volume Haiku was the first book on Japan I read. Together with his books on senryū and his translation/commentary on Mumonkan, I have continually reread them for inspiration and pleasure and relied on them as valuable references. I knew little about the man himself—nobody did in those days. Fortunately, Poetry and Zen finally fleshes out the life of this eccentric scholar. The book also provides the background for the remarkable internationalization of Zen in the second half of the twentieth century. On all fronts, Poetry and Zen is an enjoyable read.” —John Stevens, translator of The Art of Peace

“Blyth’s previously unpublished writings are reason enough to purchase this book. A second reason is the quality of the writing. One aspect that Blyth found vital in haiku and senryū is humor, which he called ‘the dance of life.’ His essays back up this claim, making reading them a pleasure. Along the way, Blyth compares haiku to senryū, to mysticism, to Zen, to Western literature, to Christian texts, to Buddhism, and to Western humor, to name a few. He also writes about Suzuki and Aitken, bringing new light to their notable Zen lives and teachings. For anyone who has not read Blyth, a treat awaits you. And for those who have, there is much more still to enjoy.”—Stephen Addiss, author of Zen Painting

“[Blyth’s] love for the spirit of haiku shines through . . . A digestible yet sophisticated selection.”—Buddhistdoor Global