Eyewitness to Chaos: Personal Accounts of the Intervention in Haiti, 1994 (Hardcover) 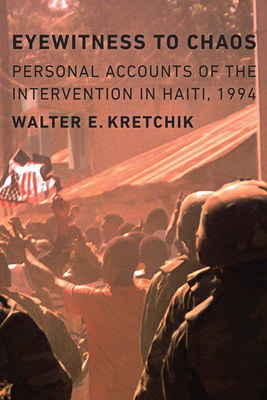 Eyewitness to Chaos: Personal Accounts of the Intervention in Haiti, 1994 (Hardcover)

In September 1994 a large U.S. invasion force converged on Haiti. Years of diplomatic efforts, secret government planning, and military rehearsals on the parts of the United States and the United Nations had failed to restore to office Haiti’s democratically elected, junta-deposed president, Jean-Bertrand Aristide, and now invasion was imminent. Poised for action and mere minutes from striking, President Bill Clinton stunned military commanders when he announced a drastic change of plan: a peaceful cooperation with an illegal government.

In Eyewitness to Chaos Walter E. Kretchik retells the experience of this unprecedented and convoluted operation through the voices of its participants. Synthesizing accounts from a cross section of military officials, Kretchik unveils the little-known inner workings of government and military planning and the real-world quandaries of operational execution faced by those involved. The thirty-seven interviewees provide insight into the many facets of the operation: strategic and operational planning; intelligence gathering; multinational force design; medical and legal complications; communication concerns; contracting and logistics; ethnic, cultural, and historical considerations; mission execution; and language barriers. What emerges is a new perspective on this attempt to secure a brighter future for Haiti’s people.

Walter E. Kretchik is professor emeritus of history at Western Illinois University. He is the author of U.S. Army Doctrine: From the American Revolution to the War on Terror.
“The UN-sponsored but American-led occupation of Haiti from 1994 to 1996 has faded from memory, rendered gauzy under history’s shroud. Now Walter Kretchik hurls the shroud aside to shine a megawatt spotlight on the intervention. Few books have done such a brilliant job of explaining the enormous complexities of conducting a limited, multinational operation.”—Peter Maslowski, emeritus professor of history at the University of Nebraska–Lincoln and coauthor of For the Common Defense: A Military History of the United States from 1607 to 2012