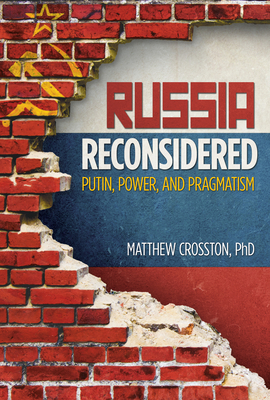 With his years of expertise in Russian studies, Dr. Matthew Crosston gives readers a close look at the many facets of the strained foreign relations between the United States of America and the Russian Federation. While acknowledging the pragmatism, self-interest, and unethical aspects of Russia's foreign policy, Crosston argues that this ever-tense situation is best viewed through an amoral, apolitical, and unbiased lens - a controversial approach in a country whose citizens have viewed Russia, the Former Soviet Union, as a black-and-white, clear-cut villain for decades. But with extensive research from the last few years, Crosston offers Americans a fresh perspective, and breaks up the current political and media narratives with a voice of hope and reason.

Few people have careers in Russian studies longer or more distinguished than that of Dr. Matthew Crosston. His love of the post-Soviet world began twenty-five years ago while studying abroad in the previously closed military city of Tambov and continued with an undergraduate degree in Russian studies, a master’s degree from SSEES–University College London, a doctoral dissertation at Brown University, scholarly collaborations with the Moscow State Institute of International Relations, and service as executive director of the East–West Fund for International Education. He has also founded the Russian Provincial Politics Summer Study Abroad Program at Clemson University and been a regular contributor to international analytic center Rethinking Russia, as well as the first American analytical blogger for the Russian International Affairs Council. Crosston’s previous books include Shadow Separatism and Fostering Fundamentalism, which focuses on his unique research specialty: international security and intelligence across the post-Soviet space, with an eye to the problems of democratic consolidation and fighting radical jihadist extremism.