Portraits of Racial Justice: Americans Who Tell the Truth (Hardcover) 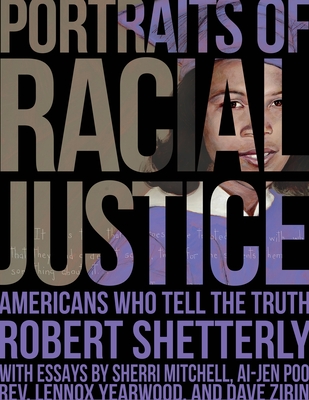 Portraits of Racial Justice: Americans Who Tell the Truth (Hardcover)

The first volume of Robert Shetterly's Americans Who Tell the Truth portrait series, Portraits of Racial Justice takes a multimedia, interdisciplinary approach, blending art and history with today's issues concerning social, environmental, and economic fairness. Shetterly's paintings, as well as profiles of those portrayed, illuminate a community of people not only willing to recognize the shortcomings of America's history, but most importantly, individuals who offer their visions of a better world moving forward. Starting with Michelle Alexander and ending with Dave Zirin, the diverse array of fifty full-color portraits spans multiple generations and struggles. This volume also includes four original opening essays on racial justice in the United States by Ai-jen Poo, Dave Zirin, Sherri Mitchell, and Rev. Lennox Yearwood, Jr., which provide an intersectional response to the long-term goal of diversity and inclusion. As Shetterly says, "without activism, hope is merely sentimental." Portraits of Racial Justice, Shetterly's homage to transformative game-changers and status-quo fighters, provides the inspiration necessary to spark social change.
Robert Shetterly is an artist based in Maine whose paintings and prints appear in collections across the United States and Europe. He is best known for his Americans Who Tell the Truth portrait series, which he began in 2002, during the run-up to the Iraq War, in an effort to surround himself with people who made him proud to be an American.