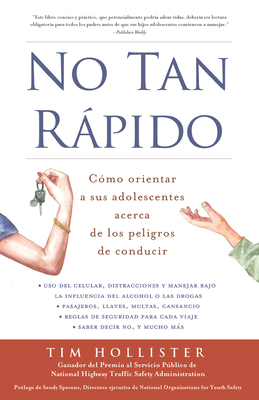 Most driving literature for parents focuses on how to teach a teen to drive, without explaining why teen driving is so dangerous in the first place or giving parents a plan to preempt the hazards teens face. By contrast, No tan rápido empowers and guides parents to understand the causes and situations that most often lead to teen crashes and to take specific, proactive steps—before and each time a teen driver gets behind the wheel—to counteract them. This authoritative guide tackles hot button issues such as texting and distracted driving, parenting attitudes (conscious and unconscious), and teen impairment and fatigue—and includes a combination of topics not found in other teen driving guides, such as:

Proceeds from the sale of this book support the Reid Samuel Hollister Memorial Fund, which subsidizes infant and toddler education in greater Hartford, Connecticut, and worthy traffic safety causes.

Tim Hollister became a national authority and spokesperson for safer teen driving after losing his 17-year-old son Reid in a car crash in 2006. He served on a Connecticut state task force that overhauled his state’s teen driving laws; is the creator of From Reid’s Dad, a national blog for parents of teen drivers; and regularly makes appearances on television and radio. He was awarded the 2012 AAA Southern New England Traffic Safety Hero of the Year Award as well as the U.S. Department of Transportation National Public Service Award, the nation’s highest civilian award for traffic safety. Sandy Spavone is the executive director for National Organizations for Youth Safety, a coalition of national organizations that promote youth empowerment and leadership and work to build partnerships that save lives, prevent injuries, and enhance safe and healthy lifestyles among all youth.

“This concise, practical, and potentially life-saving book should be required reading for every parent before their teen gets behind the wheel.”  —Publisher’s Weekly, on the English-language edition

“A public service to parents of teen drivers and the cause of traffic safety, particularly in the area of safe teen driving. Government officials and the public rely heavily on parents for assistance and cooperation to promote safety. The advice and insights in Not So Fast are a significant step toward that goal.”  —Norman Mineta, former Secretary of U.S. Department of Transportation, on the English-language edition

“I strongly recommend Not So Fast as evidence-based, sensible advice to parents seeking to make informed decisions as their teens become drivers. This is a highly readable and important guide.”  —Allan F. Williams, former chief scientist, Insurance Institute for Highway Safety, on the English-language edition

“Despite having worked in traffic safety for three decades, I still found myself shaking in my boots when my son began driving. Not So Fast honestly and directly takes parents by the hand and lays out what they should be doing to help their teens survive these most dangerous years.”  —Pam Fischer, New Jersey Teen Safe Driving Coalition, on the English-language edition

"An interesting addition to an underrepresented topic; recommended for all libraries."  —Library Journal, on the English-language edition