World War I for Kids: A History with 21 Activities (For Kids series #50) (Paperback) 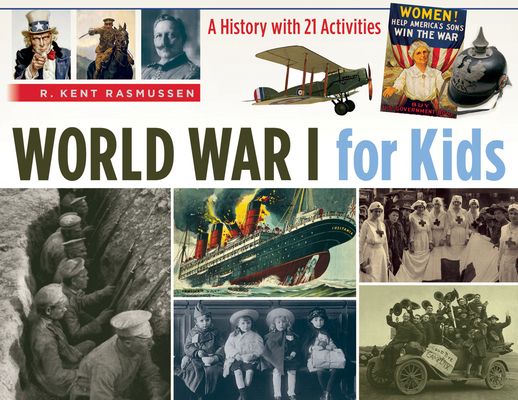 World War I for Kids: A History with 21 Activities (For Kids series #50) (Paperback)

This is book number 50 in the For Kids series series.

One hundred years after the start of the “Great War,” World War I for Kids provides an intriguing and comprehensive look at this defining conflict that involved all of the world’s superpowers. Why and how did the war come about? What was daily life like for soldiers in the trenches? What roles did zeppelins, barbed wire, and the passenger ship Lusitania play in the war? Who were Kaiser Wilhelm, the Red Baron, and Edith Cavell? Young history buffs will learn the answers these questions and many others, including why the western front bogged down into a long stalemate; how the war ushered in an era of rapid military, technological, and societal advances; and how the United States’ entry helped end the war. Far from a dry catalog of names, dates, and battles, this richly illustrated book goes in depth into such fascinating topics as turn-of-the-20th-century weaponry and the important roles animals played in the war, and explains connections among events and how the war changed the course of history. Hands-on activities illuminate both the war and the times.

R. Kent Rasmussen is the author or editor of more than 20 books, including the award-winning The United States at War and many books on Mark Twain.

“Makes a useful addition to many collections...Even students who are unenthusiastic about warfare will find themselves intrigued by chapters such as “Animals Go to War ..."  —Booklist

“[World War I for Kids] explains the war without talking down to kids.” —Austin American-Statesman

“The inclusion of accompanying activities would make this a particularly useful volume for teachers looking to incorporate such activities into their lessons. This would be an essential purchase for most public libraries.” —YA Books Central

“Every so often a really outstanding book comes along for younger readers. When a book like World War I for Kids comes along, it offers an opportunity that a parent should embrace.” —Bookreviews by Alan Caruba

“This is a great resource to have for your history library. It’s engaging and not too text-bookish. As an unschooling family it was right up our alley, even as high schoolers. I wish I had all the books in this series.” —Mama Kautz

“An impressive yet manageable overview of the Great War. This is a well conceived book, and one with a trove of good artwork.” —American History magazine

“I imagine that this book, and its companion World War II for Kids: A History with 21 Activities (For Kids series)will be very popular in my 5th grade classroom.” —A Year of Reading