The Grand Delusion: What We Know But Don't Believe (Paperback) 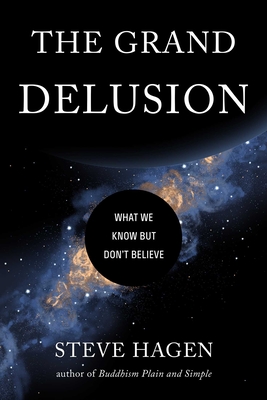 The Grand Delusion: What We Know But Don't Believe (Paperback)


Special Order—Subject to Availability
This is a fun, unique book that goes deep into the great mysteries of knowing—something like Lawrence Krauss's A Universe from Nothing meets Sam Harris's Waking Up. Or, perhaps, Sam Harris and Stephen Hawking meet Socrates.

Robert Pirsig wrote of Steve Hagen’s first book, Why the World Doesn’t Seem to Make Sense, “For those who are certain that objectivity and intellect are the ground floor of all knowledge, this can be a valuable trip to the sub-basement.”

Now, in The Grand Delusion, Hagen drills deeper, into the most basic assumptions, strengths, and limitations of religion and belief, philosophy and inquiry, science and technology. In doing so, he shines new light on the question Why is there Something rather than Nothing?—and shines this light from an entirely unexpected (and largely unexplored) direction.

Using a provocative mix of examples from physics, philosophy, religion, myth, neuroscience, and mathematics—and a clever conversational exploration between Hagen and his interlocutor, “ANYONE”—this book also offers a fresh perspective on other questions that science, philosophy, and religion have long grappled with. Such topics include:

- What does it mean to exist?
- What is consciousness?
- What is reality?
- What is the nature of truth?

Layer by layer, Hagen examines the questions we ask, the way we ask them, the assumptions and beliefs we hold dear, and the ways in which we separate ourselves from the very answers we seek. In the process, he draws on sources that include Huang Po, Richard Feynman, Sir Arthur Eddington, Hui-Neng, Susan B. Anthony, Daniel Dennett, Joseph Campbell, Dogen, Emily Dickinson, Nagarjuna, Ikkyu, William I. McLaughlin, Sam Harris, and Henry David Thoreau.

Ultimately, this book reveals how all of these fundamental questions—and many, many more—stem from a single error, a single unwarranted belief, a single Grand Delusion.

The Grand Delusion helps readers move past this delusion into insight that can settle these age-old and seemingly intractable questions.
Steve Hagen has been an instructor in religion at St. Olaf College and a science researcher for the University of Minnesota and the State of Alaska. In 1979 he was ordained a Zen priest, and in 1989 he received formal endorsement to teach. He has, however, no formal ties to any Zen or Buddhist hierarchy. In 1997, he founded Dharma Field Meditation and Learning Center in Minneapolis, where he continues to serve as head teacher. He is the author of the bestselling Buddhism Plain and Simple and several other popular books on religion, science, and philosophy.
“I love Steve Hagen’s books! He manages to write about the most abstruse truths and make them sound as sensible and as straightforward as baseball scores—how does he do it? This book—which is so much fun to read and is full of scientific as well as everyday examples—is written in the form of a dialog between Steve and ‘Anyone’ (you and I) in which everything Anyone thinks makes sense doesn’t. By the time Anyone gets to the end, Anyone agrees. This is a wonderful book.”
— Norman Fischer, poet, Zen priest, and author of The World Could Be Otherwise and On a Train at Night

“A brilliant philosophical masterpiece. Hagen explores some of our most cherished assumptions about reality and self in a thought-provoking yet lighthearted interview-style conversation. This book is bound to shake up how you understand your life.”
— Mark Van Buren, author of The Fool’s Guide to Actual Happiness

“A thought-provoking read. Steve Hagen has a knack for taking complex ideas and presenting them simply and straightforwardly.”
— Tim Burkett, guiding teacher, Minnesota Zen Meditation Center and author of Nothing Holy about It and Zen in the Age of Anxiety