Reggie, My Rhinoceros: A gentle children’s book on grief (Hardcover) 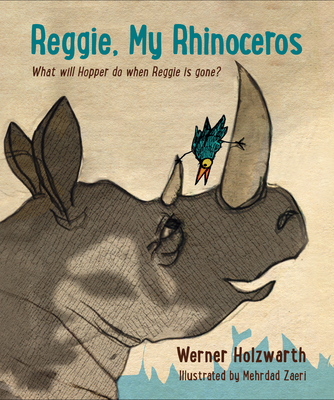 Reggie, My Rhinoceros: A gentle children’s book on grief (Hardcover)


On Our Shelves Now at:
Best friends are together through thick and thin—and forever in memory

For Hopper the oxpecker bird, life is just perfect. He lives on top of his best friend, Reggie the rhino, where there are lots of yummy flies to eat. Reggie keeps Hopper safe when lions are lurking, and dry in the rainy season. Hopper wouldn’t change a thing!

But Reggie isn’t young anymore, so he wants to prepare Hopper for life without him. He helps Hopper remember all their good times together—their lazy days and exciting escapes, their teasing nicknames and corny jokes. The only problem is Hopper’s habit of exaggerating!

Hopper keeps watch by starlight as Reggie lies down for the last time. And at daybreak, he takes flight to find his own way in the world. When Hopper meets a new crew of oxpeckers, he can hardly wait to tell them all about his rhinoceros. Remember when Reggie chased off three—no, three hundred—sneaky lions?
Werner Holzwarth was born in 1947 near Stuttgart, attended school there, and then studied at the Berlin University of the Arts. Before finding international success as a children’s author with The Story of the Little Mole Who Went in Search of Whodunit, he worked as a copywriter, as the creative group head of a major advertising agency, and in South America as a freelance journalist. From 1995 to 2012, he was a professor of visual communications at Bauhaus University, Weimar. When not on tour to do readings of his books, he works in Frankfurt.
Mehrdad Zaeri was born in 1970 in Iran. His family applied for asylum in Germany when he was fourteen, emigrating in 1985. After finishing school, he decided to draw pictures for the rest of his life. While exhibiting his early drawings, he also worked as a taxi driver. By 2001, he was a full-time freelance artist. He also creates drawings as part of multimedia performances, including those by the storytelling group Knopfkino, which he founded. Since 2016, he and his wife, Christina Laube, as Duo Sourati, have been painting large murals in cities around the world.
“It’s hard to think of a tighter relationship than that enjoyed by Reggie, a rhinoceros, and Hopper, a tiny oxpecker bird . . . Holzwarth uses their symbiosis as a way to describe a close relationship, its inevitable end, and a way forward. Though it’s about grief, this is a largely fun book . . . [with] a very satisfying resolution.”—Booklist

“A bird coping with the loss of the rhinoceros he lived atop recalls their shared adventures.”—Publishers Weekly

A Zeit and Radio Bremen LUCHS Prize of the Month winner

“Just as joy and happiness are part of life, so are grief and pain . . . but Holzwarth never lets the heaviness and sadness gain the upper hand. . . . It is also fascinating how Zaeri lights up the muted colors in which he draws. . . . A story of saying goodbye and remembering.”—Zeit

“A wonderful picture book, profound, complex, yet quite simple . . . [Holzwarth] tells us that holding on and letting go, experiencing and remembering, crying and laughing are inseparable. At his side, illustrator Mehrdad Zaeri translates what is said and unsaid into masterful imagery.”—rbbKultur

“Writing a story about death is not easy. Too often it gets cheesy, or the pain is glossed over. Werner Holzwarth succeeds in telling one without sentimentality, pathos, or religious transfiguration. One of the most beautiful picture books of the year.”—Titel Kulturmagazin