The Telescreen: An Empirical Study of the Destruction and Despiritualization of Consciousness (Paperback) 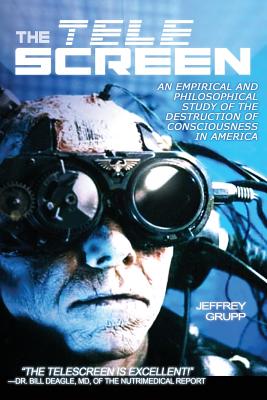 The Telescreen: An Empirical Study of the Destruction and Despiritualization of Consciousness (Paperback)


Not On Our Shelves—Ships in 1-5 Days
The Telescreen is the pervasive media screen put in front of, and injected into, the eyes and ears of humans in the American electronic techno-culture. This begins from birth, and moulds consciousness throughout life: not a genuine human consciousness, but rather is a less-than-human, despiritualized semi-consciousness. People today continually flood their consciousnesses with images and impressions from television, videogames, church, radio, billboards, textbooks, magazines, newspapers, etc.- the "telescreen world" of Orwell's 1984. The Telescreen is about how this pseudosphere destroys consciousness and society as humans give their attention, consciousness, and vital spirit to the telescreen. The result is a society of unholy subhumans, who no longer act like they have souls: They cannot turn off the telescreen world even to have dinner and talk to each other or to their children. When they do talk it is mostly about impressions from the telescreen world. Their inner subjective consciousness is constructed and formed by the telescreen, leading to a world of despiritualization and warmongering by hordes of conformist, petty, unhappy troll-like "yes-men." -- Jeff Grupp The telescreens of 1984 substituted fiction lives for the empty ones of a brainwashed population, as in Plato's cave. Grupp drives it home that this is our world now. Some features of this dream-world of The Telescreen: Materialism and consumerism make people into robots, shallow stooges. Degrading self-images, down-dumbing education of drills, not thinking skills. War propaganda fed on pure fakery and repetition by the media, censored of truth and filled with non-news, gossip and cant. Brainwashing underpinned by fallacious reasoning. Example: Iran and Iraq slandered as murderously planning to unleash WMDs, while the US really has and uses them for genocide against target nations. Information warfare: The bias of "educational" TV shows like the "History Channel." Trusted figures hired to peddle suspect messages. Journalists who stray from the party line into real issues are fired. Exploiting the herd instinct to impose conformity. Psychological tyranny is more effective than brute force. An artificial consciousness is dinned into people by constant electronic stimuli. They depend on it -- and on pharmaceutical drugs too -- for a feeling of well-being: they are addicts. Appendix -- Infowars articles: the NWO is taking over the patriot and truth movements, seemingly attacking itself. We need Jeffersonian militias, not gun control. -- J-P Leonard.