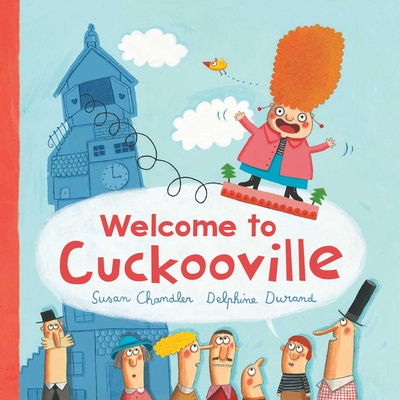 
Special Order—Subject to Availability
One of the townspeople in Cuckooville talks nothing but gobbledygook and the Mayor has had enough! “This has got to stop!” he demands. But has the Mayor spoken too soon?
One day, disaster strikes the town. Strange foreigners have invaded and no one can understand a word of what they are saying—no one, that is, except for the Gobbledygook-speaking Mrs. Gobbledygook! Will she be the hero of the day and finally interpret what these newcomers are requesting? Renowned illustrator Delphine Durand and Kate Greenaway Medal–nominated author Susan Chandler have created a hilarious and entertaining collaboration in this jaunty book about acceptance, diversity, and neighborliness.
Susan Chandler was born in Southampton and moved to London to attend the Central School of Speech and Drama. She has written many children’s books, and the limits of her imagination are not known. She works at the Royal Opera House in Covent Garden and from the outside is a completely normal person, but inside she thinks in rhyme and is always thinking about the next story. She lives in London, England.

Delphine Durand was born in Dijon, France, but grew up in Senegal and La Puisaye before moving to Montpellier as a teenager. For the last twelve years, she has worked as an illustrator in Marseille. She studied art in Strasbourg and has won many awards for her celebrated art style and wonderful sense of humor. Delphine lives in Paris, France.