Island of the Lost: An Extraordinary Story of Survival at the Edge of the World (Paperback) 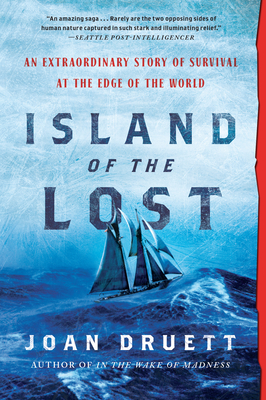 Island of the Lost: An Extraordinary Story of Survival at the Edge of the World (Paperback)


Not On Our Shelves—Ships in 1-5 Days
“Riveting.” —The New York Times Book Review Hundreds of miles from civilization, two ships wreck on opposite ends of the same deserted island in this true story of human nature at its best—and at its worst.

It is 1864, and Captain Thomas Musgrave’s schooner, the Grafton, has just wrecked on Auckland Island, a forbidding piece of land 285 miles south of New Zealand. Battered by year-round freezing rain and constant winds, it is one of the most inhospitable places on earth. To be shipwrecked there means almost certain death.

Incredibly, at the same time on the opposite end of the island, another ship runs aground during a storm. Separated by only twenty miles and the island’s treacherous, impassable cliffs, the crews of the Grafton and the Invercauld face the same fate. And yet where the Invercauld’s crew turns inward on itself, fighting, starving, and even turning to cannibalism, Musgrave’s crew bands together to build a cabin and a forge—and eventually, to find a way to escape.

Using the survivors’ journals and historical records, award-winning maritime historian Joan Druett brings to life this extraordinary untold story about leadership and the fine line between order and chaos.
Joan Druett is a maritime historian and the award-winning author of several books, including Petticoat Whalers, She Was a Sister Sailor, Hen Frigates, Tupaia, and The Discovery of Tahiti. Her interest in maritime history began in 1984, when she discovered the grave of a young American whaling wife while exploring the tropical island of Rarotonga; she subsequently received a Fulbright fellowship to study whaling wives in Massachusetts, Connecticut, and California. Her ground-breaking work in the field of seafaring women was also recognized with a L. Byrne Waterman Award. She is married to Ron Druett, a maritime artist.
“One of the finest survival stories I've read.” —Seattle Times

“If the southern part of Auckland Island is all Robinson Crusoe, the northern part is more Lord of the Flies . . . Druett is an able and thorough guide . . . [She] shows that real leadership is rare and powerful.” —The New York Times Book Review

“Those yearning for a classic man vs. nature, triumph-over-terrible-odds story, get ready to set sail.” —Paste

“This is a fine addition to the genre of survival tales like Endurance or In the Heart of the Sea.” —Publishers Weekly