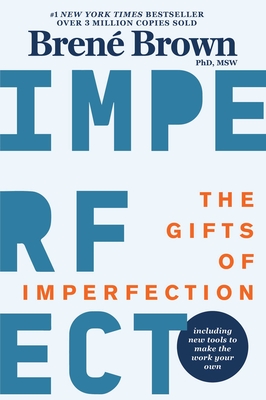 
On Our Shelves Now at:
NEW YORK TIMES BESTSELLER • This tenth-anniversary edition of the game-changing #1 New York Times bestseller features a new foreword and new tools to make the work your own.

For over a decade, Brené Brown has found a special place in our hearts as a gifted mapmaker and a fellow traveler. She is both a social scientist and a kitchen-table friend whom you can always count on to tell the truth, make you laugh, and, on occasion, cry with you. And what’s now become a movement all started with The Gifts of Imperfection, which has sold more than two million copies in thirty-five different languages across the globe.
What transforms this book from words on a page to effective daily practices are the ten guideposts to wholehearted living. The guideposts not only help us understand the practices that will allow us to change our lives and families, they also walk us through the unattainable and sabotaging expectations that get in the way.
Brené writes, “This book is an invitation to join a wholehearted revolution. A small, quiet, grassroots movement that starts with each of us saying, ‘My story matters because I matter.’ Revolution might sound a little dramatic, but in this world, choosing authenticity and worthiness is an absolute act of resistance.”
Dr. Brené Brown is a research professor at the University of Houston, where she holds the Huffington Foundation Endowed Chair at the Graduate College of Social Work. She also holds the position of visiting professor in management at the University of Texas at Austin McCombs School of Business.

Brené has spent the past two decades studying courage, vulnerability, shame, and empathy. She is the author of six #1 New York Times best sellers and is the host of two award-winning Spotify podcasts, Unlocking Us and Dare to Lead.

Brené’s books have been translated into more than 30 languages, and her titles include Atlas of the Heart, Dare to Lead, Braving the Wilderness, Rising Strong, Daring Greatly, and The Gifts of Imperfection. With Tarana Burke, she co-edited the best-selling anthology You Are Your Best Thing: Vulnerability, Shame Resilience, and the Black Experience.

Brené’s TED talk on the Power of Vulnerability is one of the top five most-viewed TED talks in the world, with over 50 million views. Brené is the first researcher to have a filmed lecture on Netflix, and in March 2022, she launched a new show on HBO Max that focuses on her latest book, Atlas of the Heart.

Brené spends most of her time working in organizations around the world, helping develop braver leaders and more-courageous cultures.

She lives in Houston, Texas, with her husband, Steve. They have two children, Ellen and Charlie, and a weird Bichon named Lucy.