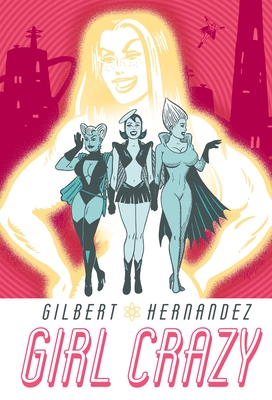 
Special Order—Subject to Availability
Kitten, Maribel, and Gaby are three very different childhood friends about to celebrate their sixteenth birthdays, which all happen to fall on the same day. But someone's missing--their fourth friend, Una, who's imprisoned in Tijuana. So the trio set out to give Una the ultimate birthday gift--freedom--even if it means taking on an entire city!

Prepare yourself for some sweet sixteen super-action, madcap plot twists, identity crises aplenty, and--of course--gorgeous girls galore! You'll go crazy over this lighthearted, rowdy, and sexy romp from Pen Center USA Award winner Gilbert Hernandez!
Gilbert Hernandez, born in 1957, enjoyed a pleasant childhood in Oxnard, California, with four brothers and one sister. In Gilbert's words, they were "born into a world with comic books in the house." His childhood enthusiasm for the medium was equaled only by his appetite for punk rock. Initiated by older brother Mario and bankrolled by younger brother Ismael, Gilbert created Love and Rockets #1 with his brother Jaime in 1981. Over 30 years later, the series is regarded as a modern classic and the Hernandez brothers continue to create some of the most startling, original, and intelligent comic art ever seen. From 1983 to 1996, Gilbert produced the now legendary Palomar saga, collected in the graphic novels Heartbreak Soup and Human Diastrophism, and considered to be one of the defining bodies of literature of its era. Gilbert lives in Las Vegas, NV, with his wife, Carol, and daughter, Natalia. The author lives in Las Vegas NV.