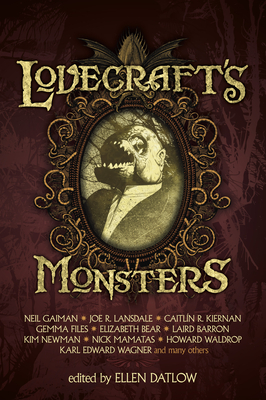 
Not On Our Shelves—Ships in 1-5 Days
Prepare to meet the wicked progeny of the master of modern horror. In Lovecraft's Monsters, H. P. Lovecraft's most famous creations? Cthulhu, Shoggoths, Deep Ones, Elder Things, Yog-Sothoth, and more, appear in all their terrifying glory. Each story is a gripping new take on a classic Lovecraftian creature, and each is accompanied by a spectacular original illustration that captures the monsters' unique visage. Contributors include such literary luminaries as Neil Gaiman, Joe R. Lansdale, Caitl n R. Kiernan, Karl Edward Wagner, Elizabeth Bear, and Nick Mamatas. The monsters are lovingly rendered in spectacular original art by World Fantasy Award?winning artist John Coulthart (The Steampunk Bible). Legions of Lovecraft fans continue to visit his bizarre landscapes and encounter his unrelenting monsters. Now join them in their journey...if you dare.

Ellen Datlow is one of horror's most acclaimed editors. She was the fiction editor of OMNI for nearly twenty years, and edited the magazines Event Horizon and Sci Fiction. Her many anthologies include the Year's Best Fantasy and Horror series; Snow White, Blood Red; Lovecraft's Monsters; and Darkness: Two Decades of Modern Horror. Datlow has won multiple Hugo, Bram Stoker, Locus, and Shirley Jackson awards. She has received several lifetime achievement awards, including a World Fantasy Award--her tenth--in 2014. Datlow lives in New York City.

"With her keen eye for craftsmanship, prolific anthologist Datlow always delivers first-class entertainment, whether her genre-at-hand is sf, fantasy, or, in this case, horror."
Booklist

"Anytime you sample a collection edited by veteran anthologist Ellen Datlow (Snow White, Blood Red; Teeth; Supernatural Noir), you know that you are in for a treat."
Shroud Magazine

"Datlow once again proves herself as a master editor.... Highly recommended."
Arkham Digest

"Make sure you are in a safe place before you open it up."
New York Journal of Books

"An anthology to be cherished and an invaluable reference for horror aficionados."
Publishers Weekly, starred review

"Darkness promises to please both longtime fans and readers who have no clue what 'splatterpunk' was supposed to mean."
San Francisco Chronicle

"Eclectic...a complete overview of some of the best horror stories published in the last twenty years."
SF Site

On The Year's Best Fantasy and Horror

"As the line between fantasy and horror blurs, this combined presentation of their exemplars will give readers of both genres much to enjoy, and may even broaden a few horizons."
Publishers Weekly, starred review

"Bring out the bone chinaa critically acclaimed fantasy/horror annual celebrates its 20th anniversary in grand style.... Worth a space on any bookshelf."
Kirkus