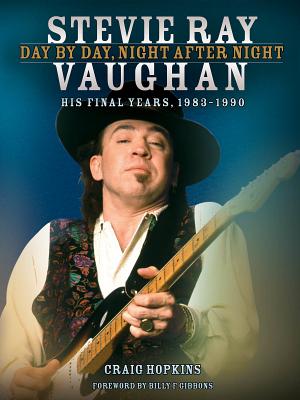 
Not On Our Shelves—Ships in 1-5 Days
Stevie Ray Vaughan tightly grips a place in music history as an unmatched blues man and guitar legend. His unique style is unmistakable and has never been repeated. His otherworldly talent and relentless drive took him from humble beginnings in Texas bars to world tours and superstar status. His bustling career and steady stream of inspiring music came to an abrupt end all too soon at the age of 35, immediately following his triumph over the demons of addiction that followed him for years. Finally free and ready for bigger, better things, Vaughan was killed in a helicopter crash in 1990, leaving his many fans to mourn the musician they had grown to love and wonder what could have been. In a day-by-day format, Craig Hopkins presents an unprecedented celebration of this artist. This book is the second installment of a two-volume account of Vaughan's life. With this work, Hopkins delivers one of the most detailed biographies of any musician. His Final Years covers Stevie Ray Vaughan and Double Trouble's recording career, from their debut release through their rise to stardom, an exciting journey with its fair share of glory and controversy. Filled with testimonials from those who knew him best and from fans everywhere, along with facts about tour dates and recordings, and a lavish gallery of rare photographs, this illustrated book (along with its companion, His Early Years, 1954-1982) is the ultimate collector's item for any Stevie Ray Vaughan fan.