Adventurists: And Other Stories (Paperback) 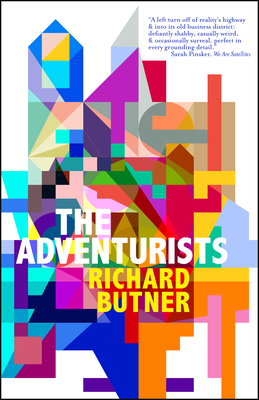 Adventurists: And Other Stories (Paperback)

Remember the girl you once knew, the theater kid? Now she's become the Queen, and you might need to rescue her. There's the historic house, where someone once saw a ghost and you almost fell in love. An ornithopter hangs in the lobby of your corporate workplace: your co-worker thinks he might be able to operate it. Once you found a tunnel under your old high school, and couldn't resist going to see where it led.

Sometimes a door will open into a new world, sometimes into the past. Putting on a costume might be the restart you are half hoping for. There are things buried here. You might want to save them. You might want to get out of the way.

Butner's allusive and elusive stories reach into the uncanny corners of life--where there are no job losses, just HCAPs (Head Count Allocation Procedures), where a tree might talk to just one person, where Death's Fool is not to be ignored.

Richard Butner's fiction has appeared in Year's Best Fantasy & Horror, been shortlisted for the Speculative Literature Foundation's Fountain Award, and nominated for the Shirley Jackson Award. He has written for and performed with the Little Green Pig Theatrical Concern, Aggregate Theatre, Bare Theatre, the Nickel Shakespeare Girls, and Urban Garden Performing Arts. His nonfiction--on topics ranging from computers to cocktails to architecture--has appeared in IBM Think Research, Wired, PC Magazine, The News & Observer, Teacher, The Independent Weekly, The North Carolina Review of Books, Triangle Alternative, and Southern Lifestyle. He lives in North Carolina, where he runs the annual Sycamore Hill Writers' Conference. He and Harry Houdini have used the same trapdoor.