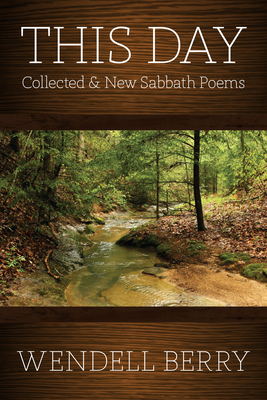 
In Stock—Click for Locations
Wendell Berry’s Sabbath Poems are filled with spiritual longing and political extremity, memorials and celebrations, elegies and lyrics, alongside the occasional rants of the Mad Farmer, pushed to the edge yet again by his compatriots and elected officials. With the publication of this new complete edition, it has become increasingly clear that the Sabbath Poems have become the very heart of Berry’s work. And these magnificent poems, taken as a whole for the first time in This Day, have become one of the greatest contributions ever made to American poetry.
Wendell Berry is the author of fifty books of poetry, fiction, and essays. He was recently awarded the Cleanth Brooks Medal for Lifetime Achievement by the Fellowship of Southern Writers and the Louis Bromfield Society Award. For over forty years he has lived and farmed with his wife, Tanya, in Kentucky.
"Overwhelmingly, though, the poems in This Day reveal the life of a person who cares about his relationship to the earth and the human community . . . His poems, whether they soothe or jolt, inspire or move to responsible action, aim at keeping 'kindness' and 'kinship' alive in the world. That alone makes This Day a book well worth reading, on a Sabbath or any other day of the week."—Marginalia Review of Books