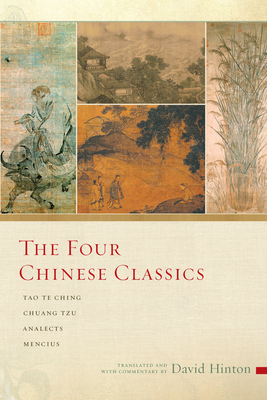 By David Hinton (Translated by)


In Stock—Click for Locations
Four seminal masterworks of Chinese thought—the Tao Te Ching, the Analects, the Chuang Tzu, and the Mencius—presented in one volume for the first time in nearly two centuries

Hinton’s award–winning experience translating a wide range of ancient Chinese poets makes these books sing in English as never before. But these new versions are not only inviting and immensely readable—they also apply much-needed consistency to key philosophical terms in these texts, lending structural links and philosophical rigor heretofore unavailable in English. Breathing new life into these classics, Hinton’s new translations will stand as the definitive texts for our era.

Perhaps the most broadly influential spiritual text in human history, Lao Tzu’s Tao Te Ching is the source of Taoist philosophy, which eventually developed into Ch’an (Zen) Buddhism. Equally influential in the social sphere, Confucius’ Analects is the source of social wisdom in China. The Chuang Tzu is the wild and wacky prose complement to the Tao Te Ching. And with its philosophical story-telling, the Mencius adds depth and complexity to Confucius’ vision.
David Hinton has been awarded a Guggenheim Fellowship, numerous fellowships from the National Endowment for the Arts and the National Endowment for the Humanities, and both of the major awards given for poetry translation in the United States: the Landon Translation Award, and the PEN Translation Award. His recent book of essays, Hunger Mountain: A Field Guide to Mind and Landscape, was on the Best–Books–of–the–Year list at The Guardian in England. Hinton lives in Vermont.