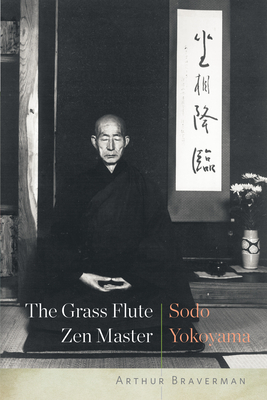 
Special Order—Subject to Availability
What motivated Sodo–san to spend the last twenty years of his life in a “temple under the sky”— a corner of a public park where he taught passersby what it means to be forever young through the funky tunes he played on his grass flute?

In The Grass Flute Zen Master: Sodo Yokoyama, we are seeking not only a truer understanding of this well–loved monk, but of zazen, Zen meditation, itself. In his search for insights into Sodo Yokoyama’s life, Arthur Braverman skillfully weaves a tapestry from seemingly disparate threads—the brief taisho period into which Sodo–san was born and where individualism shone; his teachers, both ancient and contemporary practitioners of Zen Bhuddism; the monk’s love of baseball; and the similarities Braverman finds between Sodo–san and Walt Whitman, who both found the universal in nature.

Through conversations with Joko Shibata, Yokoyama’s sole disciple, and careful study of his teacher’s poetry, an intriguing tension between the personal and the universal is revealed.

The Grass Flute Zen Master is a meditative examination not of just one life, but of many. The lineage of teacher and protégé is traced back through generations, contemporaries are drawn up from unexpected places, and Braverman examines his own long journey in Zen Buddhism; confronting his own expectations and surprising disappointments (the monk lived in a boarding house and later took a cab to his park when he could no longer walk the whole way) and the understanding and acceptance that followed. “When you play the leaf,” Sodo–san once wrote, “you’ll usually be a little out of tune. That’s where its very charm lies . . .”
Arthur Braverman is an American author and translator, primarily translating from Japanese to English. A Zen Buddhist practitioner, Braverman lived in Japan for seven years and studied at Antai–ji temple in 1969 training under Kosho Uchiyama. He lives in Ojai, California.
Praise for Mud and Water: The Teachings of Zen Master Bassui

"Bassui was one of Japanese Zen's most original, dynamic and accessible teachers. Braverman has given us a sparkling translation that fully captures Bassui's unique vigor and insight and throws new light on an often neglected period of Zen's history." —Peter Haskel, author of Bankei Zen

"How wonderful! Not only the words of Zen Master Bassui, but also his marrow. Wherever you go in this precious book you will find your life." —Joan Halifax Roshi, Head Teacher, Upaya Zen Center

"Bassui's standard of enlightenment is awe inspiring! For over 30 years of our own practice Bassui's talks have inspired us. No matter how often we read him, his teaching is always fresh and alive. No matter how far into the bottomless well of wisdom we go, Bassui is there coaxing us deeper." —Zen teachers Chozen and Hogen Bays, co–abbots of Great Vow Zen Monastery

"Step in anywhere and you sink deeper and deeper through the rich mud. Thank you, Arthur Braverman, for introducing us so graciously."—Robert Aitken

"This work fully displays the engaging teaching style of Bassui, an important medieval Japanese master. With his independent spirit and dedication to Buddha nature, Bassui managed to bridge and include several prominent strands of Zen and Japanese Buddhism. His teachings demonstrate persistent study of true self, right in the mud of phenomena. He drinks the water of diverse Dharma teachings, helpfully elucidating their metaphors for us." —Taigen Dan Leighton, author of Bodhisattva Archtypes and translator, Cultivating the Empty Field

Praise for Warrior of Zen: The Diamond–Hard Wisdom Mind of Suzuki Shosan

"Zen has often been saddled with the belief that only quiet contemplation and inactivity can lead the practitioner to enlightenment. This work is a welcome counterpoint to this belief. Suzuki Shosan, a samurai warrior under the Shogun Tokugawa Ieyasu, became a Zen monk and brought to Zen an active philosophy. He believed that a warrior's life was well suited to Zen because both demanded vitality, active belief, courage, and what he called "death energy"–the readiness to confront death at any moment. This book contains selections of the Roankyo, talks given by Suzuki Shosan to his students. The editor/translator does a good job of maintaining the colloquial atmosphere of the original text; he allows the teachings to speak for themselves. This book is a good introduction for the English–reading world to a long–neglected variation of Zen philosophy. Recommended for both public and academic libraries." —Glenn Masuchika, Chaminade Univ. Lib., Honolulu

Praise for A Quiet Room: Poetry of Zen Master Jakushitsu

"I applaud Braverman's efforts to bring the Masters to life in the Western heart." —NAPRA Review