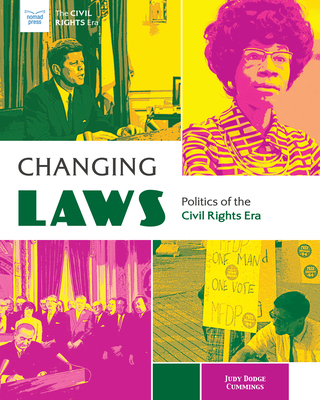 
On Our Shelves Now at:
A deep dive into the politics of the Civil Rights Era, including the passing of new laws and the presidential responses to protest. A terrific way for kids ages 12 to 15 to learn about the Civil Rights Movement, especially as the Black Lives Matter movement grows across the United States. "We shall overcome" was the refrain of the Civil Rights Movement, but overcoming centuries of discrimination was not easy. When the activism of civil rights protestors exposed the rampant racism embedded in America's politics for the world to see, political leaders in the federal government were forced to act. In Changing Laws: Politics of the Civil Rights Era, students ages 12 to 15 explore the key legislative and judicial victories of the era that spanned from 1954 to the early 1970s. The successes of Brown v. the Board of Education, the Civil Rights Act of 1964, the Voting Rights Act of 1965, and the Fair Housing Act of 1968 were the results of African American activism and a growing awareness of social justice and injustice. Marches, demonstrations, boycotts, and lawsuits prodded local and state governments to reveal the bigotry of their laws and the brutality of their oppression of black citizens. As racial tensions ripped the country apart, presidents from Eisenhower through Nixon worked to uphold the U.S. Constitution, sometimes willingly and sometimes reluctantly. As members of Congress debated and negotiated, change came slowly. Schools, restaurants, and polling stations all opened their doors to African Americans. But victory was incomplete and came at a price. And today, we're seeing that the job is still unfinished, as protestors take to the streets and make their voices heard in a call for anti-racism at all levels of society. In this book, hands-on projects and research activities alongside essential questions, links to online resources, and text-to-world connections promote a profound understanding of history and offer opportunities for social-emotional learning. Incidences of racial discrimination and racial division are in the news frequently, and this book informs readers of how political change during the civil rights movement of 1954 to the early 1970s eliminated some racial discrimination, but was unable to remove all obstacles to equality. Today's division between political parties impedes legislative progress on many issues, and this book explores how similar political divisions were overcome in the 1960s, resulting in the passage of key civil rights laws. Uses an inquiry-based approach to encourage readers to explore the present status of civil rights for blacks in the United States. Projects include Mapping your school's degree of segregation, Deconstructing the photograph that moved John F. Kennedy to support the Civil Rights Act of 1964, and Research today's voter suppression.     About the Civil Rights Movement series and Nomad Press Changing Laws: Politics of the Civil Rights Era is part of a new series from Nomad Press, The Civil Rights Era, that captures the passion and conviction of the 1950s and '60s. Other titles in this set include Boycotts, Strikes, and Marches: Protests of the Civil Rights Era; Sitting In, Standing Up: Leaders of the Civil Rights Era; and Singing for Equality: Musicians of the Civil Rights Era. Nomad Press books in The Civil Rights Era series integrate content with participation. Combining engaging narrative with inquiry-based projects stimulates learning and makes it active and alive. Nomad's unique approach simultaneously grounds kids in factual knowledge while allowing them the space to be curious, creative, and critical thinkers. All books are leveled for Guided Reading level and Lexile and align with Common Core State Standards and Next Generation Science Standards. All titles are available in paperback, hardcover, and ebook formats.
Judy Dodge Cummings has taught American history for 25 years. She has a BA in Broadfield Social Studies and an MFA in Creative Writing for Children and Teens. She is the author of Immigration Nation: The American Identity in the Twenty-First Century; The Underground Railroad: Navigate the Journey from Slavery to Freedom with 20 Projects; and The Civil War: The Struggle that Divided America from Nomad Press. Judy lives in Reedsburg, Wisconsin.