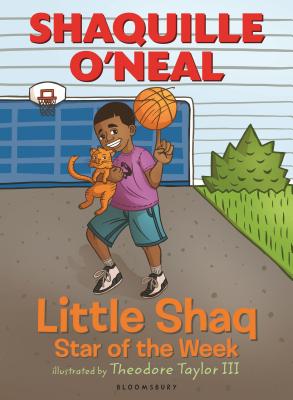 Little Shaq has always wanted his own kitten, but his parents aren't sure he's responsible enough. When Little Shaq is chosen as his class's Star of the Week, he knows that this is his moment to shine, to prove to his parents that they can count on him. Will Little Shaq be able to show he's ready for his very own pet?

Theodore Taylor III is a children's book author and illustrator living in Richmond, Virginia with his wife Sarah and son Theo. He is the illustrator of Woke, Woke Baby, and the New York Times bestselling C is for Country by Lil Was X. He also received the Coretta Scott King John Steptoe New Talent Award for his work on When The Beat Was Born: DJ Kool Herc and the Creation of Hip Hop. He is also the illustrator behind Shaquille O'Neal's Little Shaq Series. During the day he also works as a front-end web developer. His work is inspired by his love of music, comics, animation, video games, street art, and more. He is also a self-proclaimed pizza connoisseur.

"The straightforward language is well-tailored to the target audience, and there’s no missing the earnest, obvious messages about compromise, teamwork, and community involvement." - Publishers Weekly on LITTLE SHAQ

"A conflict-resolution story that may well inspire young sports lovers to garden--or young gardeners to pick up a basketball." - Kirkus Reviews on LITTLE SHAQ

"The language is simple and the story filled with a sense of community and friendship. . . A sweet addition to chapter book collections." - School Library Journal on LITTLE SHAQ