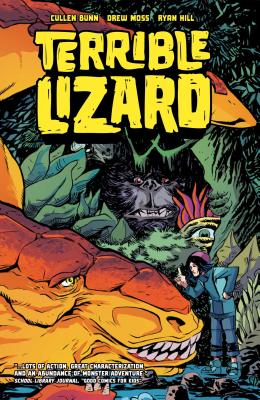 
Special Order—Subject to Availability
The touching story of a girl and her T-Rex—with a healthy dose of collateral damage and monster conflict on the side! When the scientists of Cosmos Labs punch a hole through time and space, they pull a ferocious dinosaur into the present. The dinosaur imprints on teenage Jessica, proving to be more mischievous than vicious. But he is not alone. Strangely mutated, prehistoric monsters begin attacking our world. When "temporal displacement" means "mutant creatures attacking the world while the U.S. military is trying to kill you," what’s a girl and her dinosaur-fighting dinosaur supposed to do?
Cullen Bunn is the writer of comic books such The Sixth Gun, Shadow Roads, The Damned, Helheim, and The Tooth for Oni Press. He has also written titles including Harrow County (Dark Horse), Uncanny X-Men, and Deadpool Kills the Marvel Universe (Marvel).

Cullen claims to have worked as an alien autopsy specialist, rodeo clown, pro wrestling manager, and sasquatch wrangler. He has fought for his life against mountain lions and performed on stage as the world’s youngest hypnotist. Buy him a drink sometime and he'll tell you all about it.