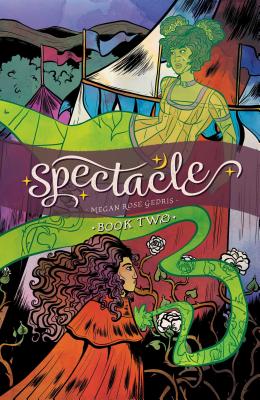 This is book number 2 in the Spectacle series.

A murder is tough thing to solve, even without temperamental performers, supernatural occurrences, and the ghost of the victim giving commentary. But as Kat's only link to the living world, it's up to scientifically-minded Anna to figure out who killed her sister—before any more murders rock the small traveling community. Yet as she gets closer to finding a lead, even more unbelievable events obscure the truth: roustabouts start sprouting horns, performers grow forked tongues, and a demon visits Anna's sleep at night. Does Kat know more than she's letting on? And can Anna keep the circus—let alone herself—safe?
Ro Salarian gave up their dream job of being a cheesemonger for their other dream job of making comics. They live in a probably haunted house in Chicago with their cat, Scrambles the Death Dealer.
"It’s Geek Love for a new generation, with lush and expressive art to boot."
— AV Club