The Simpsons and Their Mathematical Secrets (Paperback) 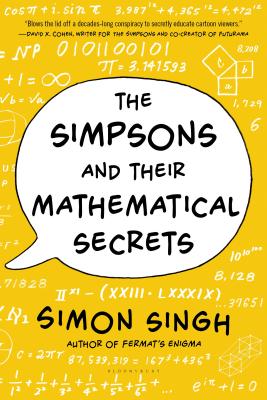 The Simpsons and Their Mathematical Secrets (Paperback)

Simon Singh, author of the bestsellers Fermat's Enigma, The Code Book, and Big Bang, offers fascinating new insights into the celebrated television series The Simpsons: That the show drip-feeds morsels of number theory into the minds of its viewers—indeed, that there are so many mathematical references in the show, and in its sister program, Futurama, that they could form the basis of an entire university course.

Recounting memorable episodes from "Bart the Genius" to "Homer3," Singh brings alive intriguing and meaningful mathematical concepts—ranging from the mathematics of pi and the paradox of infinity to the origin of numbers and the most profound outstanding problems that haunt today's generation of mathematicians. In the process, he illuminates key moments in the history of mathematics, and introduces us to The Simpsons' brilliant writing team—the likes of David X. Cohen, Al Jean, Jeff Westbrook, and Stewart Burns—all of whom have various advanced degrees in mathematics, physics, and other sciences.

Based on interviews with the writers of The Simpsons and replete with images from the shows, facsimiles of scripts, paintings and drawings, and other imagery, The Simpsons and Their Mathematical Secrets will give anyone who reads it an entirely new insight into the most successful show in television history.

Simon Singh received his Ph.D. in particle physics from the University of Cambridge. A former BBC producer, he directed the BAFTA Award–winning documentary film Fermat's Last Theorem and wrote Fermat's Enigma, the bestselling book on the same subject. His bestseller The Code Book was the basis for the BBC series The Science of Secrecy. His third book, Big Bang, was also a bestseller, and Trick or Treatment: The Undeniable Facts About Alternative Medicine, written with Edzard Ernst, gained widespread attention. Singh lives in London.

“Engaging (and educational) . . . Singh delves into the academic backgrounds of some of the most poindextrous Simpsons writers.” —Wired

“Plenty of solid, vest-pocket profiles of both the show's writers and great mathematicians of the past . . . A fun trip with the ‘ultimate TV vehicle for pop culture mathematics.'” —Kirkus Reviews

“Singh spins tales of cryptic intrigue in every chapter.” —Wall Street Journal on The Code Book