The Emperor Far Away: Travels at the Edge of China (Hardcover) 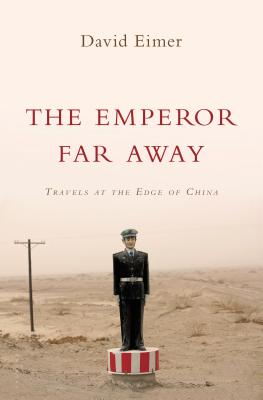 The Emperor Far Away: Travels at the Edge of China (Hardcover)

In 1949, Mao Zedong announced the birth of the People's Republic of China, a proclamation to the world that, after centuries of war and social conflict, China had emerged as one nation. Since then, this idea has been constantly propagated for the benefit of the international community. For many living in the vast country, however, the old Chinese adage holds true: “the mountains are high and the emperor is far away.”

Few Westerners make it far beyond the major cities-the Chinese government has made it difficult to do so. David Eimer undertook a dangerous journey to China's unexplored frontiers (it borders on fourteen other countries), to the outer reaches where Beijing's power has little influence. His chronicle shines new light on the world's most populous nation, showing clearly that China remains in many ways a divided state. Traveling through the Islamic areas of Xinjiang province, into the forbidden zone of Tibet, and across Route 219, which runs the rough boundary shared with India and is the only disputed frontier in China, Eimer exposes the country's inner conflict. All the tensions in China today-from its war against drugs and terrorism and the unstable relationships it maintains with Russia and Korea to its internal social issues-take on new meaning when seen from China's most remote corners. A brilliant melding of journalism and history, The Emperor Far Away is essential reading for anyone interested in contemporary China.

David Eimer is the Beijing correspondent for the Sunday Telegraph and has been living in China for the past five years. He also writes regularly for the Daily Telegraph and has written pieces for a number of publications, including Time Out, the Independent and the Times, and has written guidebooks about Beijing, Shanghai, and China for Lonely Planet. He lives in Beijing.

“A superlative choice for either casual interest or a more in-depth look at modern China.” —starred review, Library Journal

“An excellent exposition on how China's hard-line stance on the immovability of its borders is affecting the lives of millions living on the fringes of both a country and a society . . . A witty and endearing travelogue, and one which presents a view of the country which may surprise even seasoned China watchers.” —South China Morning Post

“A timely book . . . Mr. Eimer provides abundant detail . . . The Emperor Far Away, which takes its title from the Chinese proverb 'the mountains are high and the emperor far away,' is also part travelogue with vivid descriptions of landscapes and people.” —The New York Times

“A lively and informative book . . . a breathtaking travelogue . . . an exciting and powerful examination of the vulnerable people who live in the path of the Dragon.” —Minneapolis Star Tribune

“The book offers insight into an important aspect of China that will likely remain in the news for some time to come.” —Christian Science Monitor

“A swift-moving, colorful account of the bewildering array of fiercely independent ethnic groups within an uneasy Chinese 'home.'” —Kirkus

“[An] engaging travelogue . . . Narrated by this curious Englishman and peopled by a cast of natives, settlers, tourists, and ex-pats, this absorbing book is a tantalizing introduction to China's diversity and the ethnic and political dynamics at the extremes of its empire.” —Publishers Weekly

“China is a vast place with millions of people from dozens of ethnic minorities living far from Beijing in regions where we Westerners rarely go. Eimer visited the fringes and tells us what he saw there.” —TIME

"Turning his back on Shanghai and Beijing, Eimer heads for China’s hinterlands--the sometimes lawless regions along the country’s 22,000km of land borders where the strictures of the Communist party seem distant. Some 50 ethnic minorities--100m people--live in these regions and Eimer aims to give a voice to their grievances against the Han majority." —Books of the Year, Financial Times

"Bookshelves are now groaning under the weight of China travelogues, but Eimer, the former China correspondent of The Sunday Telegraph, has forged genuinely new ground as he recounts his travels to China’s insubordinate far corners, where attitudes and lifestyles are very different from Shanghai’s consumerism or Beijing’s grey governmentality." —Daily Telegraph

"Original and insightful travelogue . . . Whether braving the horrors of Tibetan pit lavatories or the Arctic temperatures of the north-east, Eimer is an entertaining guide to those parts of China that most travel writers never reach." —The Guardian