Change from Within: Reimagining the 21st-Century Prosecutor (Hardcover) 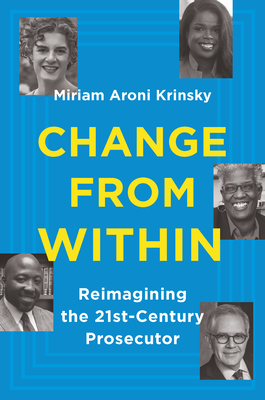 Change from Within: Reimagining the 21st-Century Prosecutor (Hardcover)

Growing up in Chicago's Cabrini-Green housing projects, Kim Foxx never anticipated that she would become the chief prosecutor in the country's second-biggest county. When Chesa Boudin was a baby, his parents were arrested and incarcerated. Visiting them in prison for decades helped shape his convictions about what justice does--and doesn't--look like in the United States. Now, along with eleven other reform-minded prosecutors voters put in office throughout the country, they reflect on the task they set for themselves: making change from within.

Using the power of their office, which has traditionally fueled mass incarceration and harsh punishments, this new breed of elected prosecutors has joined the movement to shake up the justice system. In Change from Within, these visionaries describe their journeys to office, what they are doing to change "business as usual," the pushback they've experienced, and their thoughts on reforms that are possible working from the inside.

Published in partnership with Fair and Just Prosecution (FJP), drawing from interviews conducted by FJP executive director Miriam Krinsky, a former federal prosecutor, this unprecedented book includes intensely personal first-person profiles of thirteen transformative DAs. Each story is accompanied by an image inspired by the prosecutor and created by a formerly incarcerated artist.

Miriam Aroni Krinsky, a former federal prosecutor, is the executive director of Fair and Just Prosecution, a network of elected local prosecutors committed to promoting a justice system grounded in fairness, equity, compassion, and fiscal responsibility. The author of Change from Within (The New Press), she lives in Los Angeles, California.