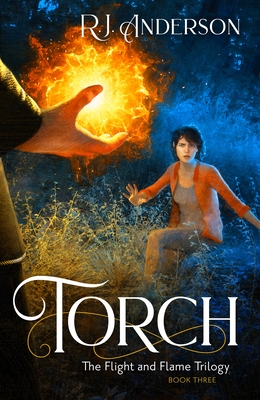 
Special Order—Subject to Availability
How do you fight fire without fire? When a freak storm uncovers the entrance to a mysterious underground chamber, Ivy and Martin expect to find treasure. But what they discover is even more valuable: a barrow full of sleeping spriggans, magically preserved for centuries. With the vengeful piskey queen Betony determined to capture Ivy and her followers, the secret hideaway could be key to both their peoples' survival. But the piskeys and spriggans are ancient enemies, and when Ivy tries to make peace her own followers threaten to turn against her. Plagued by treachery, betrayal and desertion on every side, Ivy must find a way to unite the magical folk of Cornwall--or doom herself, Martin and everyone she loves to death at Betony's hand. Yet without the legendary fire-wielding power that marks a true piskey queen, can Ivy convince her people to believe?

Born in Uganda to missionary parents, R.J. (Rebecca Joan) Anderson is a women's Bible teacher, a wife and mother of three sons, and a bestselling fantasy author for older children and teens. Her debut novel sold more than 120,000 copies worldwide, while her other books have been shortlisted for the Nebula Award, the Christy Award, and the Sunburst Award for Excellence in Canadian Science Fiction. She lives in Stratford, Ontario, Canada.