Tell This to My Mother: A Novel Based on the True Story of Coco Ramazani, a War Rape Victim (Paperback) 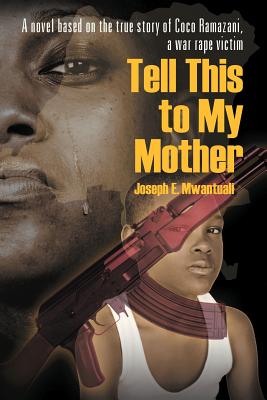 Tell This to My Mother: A Novel Based on the True Story of Coco Ramazani, a War Rape Victim (Paperback)


Not On Our Shelves—Ships in 1-5 Days
(This book cannot be returned.)
Tell This to My Mother is the story of child soldiers in the Democratic Republic of Congo, of rape used as a weapon of war, and of the hope embodied by a tough young woman who refuses to go silently into the night. It is told by Coco Ramazani, an orphan who was tricked into the rebellion and left to die in a military camp filled with thousands of drugged foreign soldiers. She escaped to America, where she is now fighting for her life. "A tragic African story told by an African by way of African storytelling techniques. This story reminds us of the movies such as 'Blood Diamond' and books such as What is the What, but Joseph Mwantuali goes further as he explores ways to exorcise the seeds of evil. A poignant story told masterfully in a way that educates the reader in both African cultures and the history of what is called the Great War of Africa. But, at the end of the day, it is the voice of a young girl speaking for all the women of Congo, and coming across as an oracle." - Felix U. Kaputu, professor at Massachusetts College of Art and Design, Boston Joseph E. Mwantuali is an African writer from the Democratic Republic of the Congo. His works of fiction include L'Impair de la nation (novel, 2007) and Septuag naire (short stories, 2000). He is a professor of African literature at Hamilton College, Clinton, N.Y. Coco Ramazani lives in Manchester, N.H. She is presently dealing with debilitating post-traumatic symptoms of her war and rape experience, and has HIV. Her wish is to see this story published before she dies. Publisher's website: http: //sbpra.com/JosephEMwantuali.