Be the Refuge: Raising the Voices of Asian American Buddhists (Paperback) 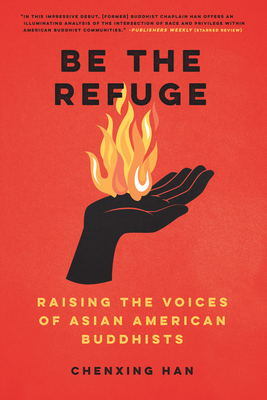 Be the Refuge: Raising the Voices of Asian American Buddhists (Paperback)


Not On Our Shelves—Ships in 1-5 Days
A must-read for modern sanghas--Asian American Buddhists in their own words, on their own terms.

Despite the fact that two thirds of U.S. Buddhists identify as Asian American, mainstream perceptions about what it means to be Buddhist in America often whitewash and invisibilize the diverse, inclusive, and intersectional communities that lie at the heart of American Buddhism.

Championing nuanced representation over stale stereotypes, Han and the 89 interviewees in Be the Refuge push back against false narratives like the Oriental monk, the superstitious immigrant, and the banana Buddhist--typecasting that collapses the multivocality of Asian American Buddhists into tired, essentialized tropes. Encouraging frank conversations about race, representation, and inclusivity among Buddhists of all backgrounds, Be the Refuge embodies the spirit of interconnection that glows at the heart of American Buddhism.
CHENXING HAN is a Bay Area-based writer whose publications have appeared in Buddhadharma, Journal of Global Buddhism, Lion's Roar, Pacific World, Tricycle, and elsewhere. She holds a BA from Stanford University and an MA in Buddhist studies from the Graduate Theological Union. After studying chaplaincy at the Institute of Buddhist Studies in Berkeley, California, she worked in spiritual care at a nearby community hospital in Oakland. Be the Refuge is her first book.
"In this impressive debut, Buddhist chaplain Han offers an illuminating analysis of the intersection of race and privilege within American Buddhist communities."
-Publishers Weekly (Starred Review)

"Be the Refuge is first and foremost a celebration. Han’s interviewees descend from numerous countries, followed various paths to their faith, practice in different ways, and often question the validity of their own identity; but Han argues—compellingly and joyfully—that all contribute to a diverse and thriving American Buddhism."
–Booklist

"An eye-opening read for anyone under the false impression that American Buddhism is primarily the province of Whites."
-Kirkus Reviews

“Han’s contribution to this overlooked aspect of the Asian American experience is an important one as it gives a voice to many invisible people in American society.”
–Library Journal


“In Be The Refuge, Buddhists from all backgrounds will find truth in the words of like-minded people from various Asian streams, dealing squarely with the complexity of ‘betwixt-and-between’ racial identities and life experiences.” –San Francisco Book Review (5/5 stars)


“Be the Refuge opens the door for deep and difficult conversations about race, religion, and representation.” –Tricycle

“Each section of Han’s groundbreaking volume traces the history of important Asian American Buddhists’ contributions in the West—from the initial trailblazers, to the bridge-builders, to the integrators, to the refuge-makers.” –Lion's Roar
"Chenxing Han writes with a singular grace, missing nothing in a work that draws from a well of academic origins, while merging cultural critique and luminous voices into a moving memoir. No doubt many an Asian American Buddhist will find themselves heard and championed here, even as the book’s careful sifting of histories and possibilities makes it valuable reading for future scholarship. Above all, Be the Refuge lives up to its name."
—erin Khuê Ninh, author of Ingratitude: The Debt-Bound Daughter in Asian American Literature

"Be the Refuge brings us stories of complexity and multiplicity from Buddhist Asian America. Reflected in this net of jewels is the heart of the American sangha—a transmission of culturally engaged Buddhism."
—Duncan Ryuken Williams, author of American Sutra: A Story of Faith and Freedom in the Second World War

"In this vivid and nuanced presentation of Asian American voices, Han offers what many of us have been longing for: young voices grappling in deep and caring ways with one of the central issues of our time: how we might build a more inclusive Buddhist community—one big enough to hold our multiple identities, whether of race, ethnicity, and culture, or of gender and tradition. This book is both impressive and necessary."
—Jan Willis, author of Dreaming Me: Black, Baptist and Buddhist

"A challenging, poignant, and powerful detailing of the young Asian American Buddhist experience, Be the Refuge beautifully interweaves academic research, personal narrative, and advocacy. A deeply valuable contribution to the discussion of Buddhism’s development in the West."
—Sumi Loundon Kim, author of Blue Jean Buddha: Voices of Young Buddhists

"Be the Refuge connects the dots linking Dharma, ethnic studies, and the politics of erasure and inclusion. At last, we hear the voices of Asian Americans which, for far too long, have been missing from the conversation about American Buddhism. Han’s work is refreshing, lyrical, amusing, honest, and immensely personal, all while challenging underrepresentation, misrepresentation, and the standard typologies of who counts as Buddhist and why."
—Karma Lekshe Tsomo, author of Women in Buddhist Traditions

"Be the Refuge not only raises the voices of Asian American Buddhists, but makes space for many other communities who feel unseen, erased, or forgotten in our tradition."
—Lama Rod Owens, author of Love and Rage: The Path of Liberation through Anger

"Han makes two vital contributions to the study of American Buddhism: her rich, textured ethnography centers and celebrates the depth and diversity of Asian American Buddhist lives, and her incisive theoretical work undoes essentialist typologies of Buddhism in the U.S. and the racial hierarchies too often undergirding them. Timely and compelling, Be the Refuge is essential reading for both religious studies and ethnic studies scholars and Buddhist practitioners and teachers."
—Ann Gleig, author of American Dharma: Buddhism Beyond Modernity

"Be the Refuge empowers the emergent generation of Asian American experience to reclaim, restore, and reconnect streams of practice, lineage, and history for all generations of Asian descent—without the narratives of Western bias—thus providing us all paths of healing and growth for all of our futures."
—Larry Yang, author of Awakening Together: The Spiritual Practice of Inclusivity and Community

"This important, insightful book focuses on the experience of Asian American Buddhists and calls us toward a Western Buddhism that offers refuge in a truly inclusive way."
—Tara Brach, author of Radical Acceptance and Radical Compassion

"Be the Refuge is a call to rescue the soul of Buddhism in the western world… throughout this amazing and comprehensive work, Han disrupts the habitual and hegemonic Buddhist discourse with the question, 'Whose Buddhism are we talking about?'"
—Zenju Earthlyn Manuel, author of The Way of Tenderness: Awakening Through Race, Sexuality and Gender