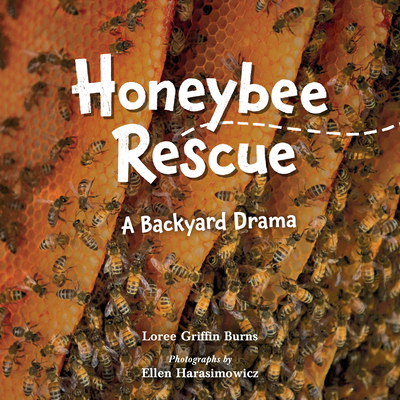 
On Our Shelves Now at:
Fans of the Scientists in the Field series will love discovering ways to save and protect bees through the eyes of a honeybee rescuer.


Follow honeybee rescuer Mr. Nelson as he expertly removes a colony of bees from Mr. Connery's barn (with a vacuum!) and helps it relocate back to a hive. Photographs of Mr.Nelson’s relocation of the colony help bring the honeybee rescue to life.

Nature lovers and scientists-to-be will be abuzz as they learn all the ways to keep honeybees (and our ecosystem) safe.
Loree Griffin Burns is an award-winning writer who holds a PhD in biochemistry. Each of her books draws heavily on both her passion for nature and her experience as a working scientist. She is the author of You're Invited to a Moth Ball, Life on Surtsey: Iceland's Upstart Island, Citizen Scientist: Be a Part of Scientific Discovery in Your Own Backyard, and Beetle Busters: A Rogue Insect and the People Who Track It.

Ellen Harasimowicz has been a professional photographer since 2003. She has made photographs for newspapers and schools, and she has illustrated five children's books, all with Loree Griffin Burns. Ellen loves to travel and photograph far-off places. www.ellenharasimowicz.com
♦ When Mr. Connery, a beekeeper, hears his garage buzzing and finds a colony of bees setting up housekeeping inside, he knows just what to do.
He calls Mr. Nelson, who arrives with his bee-vac, a special vacuum cleaner designed for exactly this situation. Mr. Nelson uses it to gently remove some 35,000 honeybees from the wax comb they’ve built in Mr. Connery’s garage and keep them safe while the two White men reconstitute the bees’ comb in a new hive for Mr. Connery’s garden. Burns, a beekeeper herself, describes the action in vivid, economical prose: “Vacuuming bees requires both patience and stamina.” She interlaces contextual information into her narrative, so readers learn why bees swarm, how they build their hives, and how Mr. Nelson’s bee-vac works even as they follow the riveting story. Harasimowicz’s crisp photos document the process clearly (that it plays out on a gorgeous summer day helps); occasional superimposed arrows with labels orient readers visually. Readers in beekeeping households will note some oversimplification that allows Burns to dive right in to the adventure, but her information is scrupulously accurate after that. They will also observe that Mr. Nelson works without a veil, a fact addressed in a closing Q&A. A glossary, sources, further reading, and acknowledgments round out the backmatter.
Both an excellent nonfiction adventure and a novel addition to honeybee lit.


♦ In a photographic essay, readers learn what happens when a man finds bees in a place where they just don’t belong. Mr. Connery keeps bees, and one day he discovers some of them have set up a new hive in a barn on his property. Mr. Connery calls a friend, Mr. Nelson, to help him solve this problem. Harasimowicz’s very interesting photographs show the whole process, from discovery to relocation. In beautiful full color, these perfectly show off the bees and their hives—both their own work, and the human-made hives. These images also show the specialized tools the men use to both capture and keep the bees, including a device that Mr. Nelson constructed that works like a vacuum cleaner. The text is simple but very engaging, describing the process clearly. A book like this could be an excellent opportunity to show young readers steps in a process and that even though bees can sting, they are also useful and pleasant creatures to be protected and not feared. VERDICT: This excellent piece of reporting would be a great addition to any library serving elementary readers.
—School Library Journal, starred review