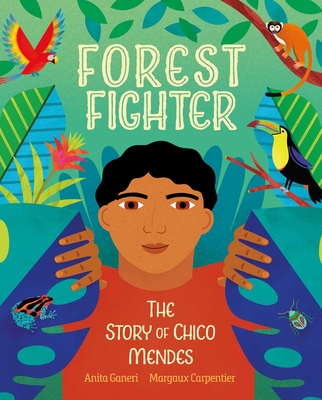 
Backordered
A picture book that tells the important story of Chico Mendes, who led the fight to protect the Amazon rainforest and demand fair treatment for the people whose livelihoods depended on it

Chico Mendes lived in the depths of the Amazon rainforest where trees grew tall and strong and wildlife roamed freely. From the age of 8, Chico worked with his father collecting sap from trees that could be sold to make rubber. Rubber tappers were very poor and the rainforest was increasingly being destroyed by burning and logging, threatening their livelihoods. Chico knew he had to take a stand. He became a spokesperson for the community, fighting hard to preserve the Amazon rainforest, and speaking up for the rights of other rubber tappers. He won several international awards for his campaigns, but the loggers still wouldn’t stop. At the age of 44, Chico was murdered by one of the loggers.

Grippingly written by award-winning author, Anita Ganeri, and vibrantly illustrated by Margaux Carpentier, Forest Fighter tells the inspiring story of Chico Mendes, who was not afraid to speak up for others and worked tirelessly to protect the rainforest. It depicts the incredible wildlife and peoples who co-exist there and shows why it is so important that all rainforests are protected.
Anita Ganeri is an award-winning author that has written over 300 books, including the best-selling Horrible Geography series. Anita was born in India but grew up and went to school and university in England. She now lives in West Yorkshire, England with her family.

Margaux Carpentier a London-based painter and illustrator. She is one of the featured artists in Taschen’s The Illustrator: 100 Best from Around the World. She works on all kind of projects, ranging from illustrated books to large scale painting and murals, and sometimes even sculptures. She is the illustrator of Darwin’s Tree of Life (Interlink/Crocodile 2019).
“A welcome and timely introduction to a pioneering Brazilian conservationist … Readers learn about the semi-feudal system under which rubber tapper communities toiled, exploited by rich landowners who deliberately sought to keep workers and their families illiterate and thus disempowered … Ganeri’s biographical account uses a narrative nonfiction style and is interspersed with factual information about the Amazon forest … [and] Carpentier’s vibrant and colorful folk art–style illustrations.”
— Kirkus Reviews

“This beautiful picture-book biography brings readers the story of Brazilian environmentalist Chico Mendes and his important work to preserve and protect the Amazon rainforest …These events come to life in Carpentier’s eye-catching, full-page illustrations, which use vibrant shades of red, green, pink, and deep purple to bring out the beauty of the rainforest, its animals, and the people who live there.”
— Booklist

“Ganeri inspires with this empathic biography of activist Chico Mendes (1944–1988) and his fight to save the Amazon rainforest … Seamlessly woven throughout is essential context about the challenges and … the pivotal impact of Mendes’s work. Ganeri’s fact-filled narration is balanced by evocative details … while Carpentier’s tropical-hued digital illustrations incorporate chalk textures, helping readers to visualize the Amazon’s destruction … Ages 7–12.”
— Publishers Weekly