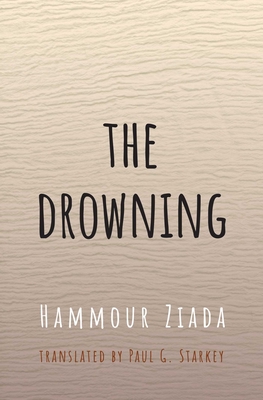 Sudan, 1968, the military coup taking place in Khartoum echoes all the way to the small rural town of Hajer Narti, where the body of a young girl has just been found in the Nile. Like every time a body is washed up on the shore, Fatima shows up, According to popular belief, when the Nile brings a new body back, it also brings back an old one. Fatima is still looking for her daughter Su'ad, believed to have drowned many years ago.

The Drowning is Hammour Ziada’s third novel. With scarce descriptions, and just the minimal amount of words, Ziada succeeds in portraying very convincing characters, and in poignantly capturing the violence of social relations in a strictly codified society. Only 13 year-old Abeer eludes the reader. Like a dream all men try to catch throughout the novel, Abeer floats silently across town, a fluttering butterfly.
Hammour Ziada is an award-winning Sudanese writer and journalist. His previous novel The Longing of the Derwish won the 2014 Naguib Mahfouz Medal for Literature and was shortlisted for the International Prize of Arabic Fiction.

Paul G. Starkey has translated works by Adania Shibli, Mansoura Ez Eldin, Youssef Rakha, Edwar al-Kharrat, Mahmoud Shukair, and others. He was Winner of the 2015 Saif Ghobash Banipal Prize for his translation of The Book of the Sultan's Seal by Youssef Rakha.
“Ziada (The Book of Khartoum) delves into forced marriages, sexual violence, and oppression in a rural Sudanese town in this affecting if opaque nonlinear narrative … [A] haunting portrayal of the Nile as both lifeblood and ever-present threat ….”
— Publishers Weekly